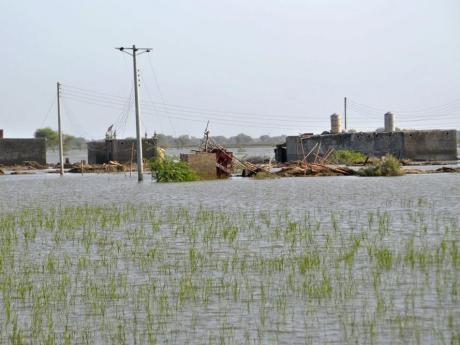 ISLAMABAD (AP) — The United Nations will seek $800 million more in aid from the international community to respond to the soaring life-saving needs of Pakistani flood survivors, a UN official said Friday.

The unprecedented deluges — likely worsened by climate change — have killed 1,678 people in Pakistan since mid-June. About half a million survivors are still living in tents and makeshift shelters.

Julien Harneis, the UN resident coordinator in Pakistan, told reporters in the Pakistani capital, Islamabad, that the latest appeal will be issued from Geneva on Tuesday.

It comes just weeks after the agency sought $160 million in emergency funding for 33 million people affected by floods.

Harneis said the UN decided to issue the revised appeal “to respond to the extraordinary scale of the devastations” caused by the floods. Pakistan's displaced are now confronting waterborne and other diseases, he said.

The outbreaks, health officials say, have caused more than 300 deaths so far.

Since July, several countries and UN agencies have sent more than 130 flights carrying aid for the flood victims, many of whom complain they have either received too little help or are still waiting for aid.

Officials and experts have blamed the rains and resulting floodwaters on climate change.

UN Secretary-General Antonio Guterres visited some of the flood-hit areas earlier this month. He has repeatedly called on the international community to send massive amounts of aid to Pakistan.