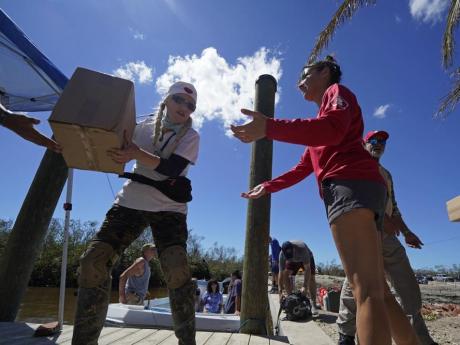 Volunteers form a human chain to offload emergency supplies that arrived by boat in the aftermath of Hurricane Ian on Pine Island in Florida's Lee County, Sunday, October 2, 2022. The only bridge to the island is heavily damaged so it can only be reached by boat or air. (AP Photo/Gerald Herbert)

FORT MYERS, Fla. (AP) — With the death toll from Hurricane Ian rising and hundreds of thousands of people without power in Florida and the Carolinas, United States officials vowed Sunday to unleash a massive amount of federal disaster aid as crews scrambled to rescue people stranded by the storm.

Days after Ian tore through central Florida, carving a deadly path of destruction into the Carolinas, water levels continued rising in some flooded areas, inundating homes and streets that were passable just a day or two earlier.

With branches strewn across the grounds of St. Hillary's Episcopal Church in Fort Myers, the Reverend Charles Cannon recognised the immense loss during his Sunday sermon but also gave thanks for what remained. That included the church's stained-glass windows and steeple.

Deanne Criswell, administrator of the Federal Emergency Management Agency, said the federal government was ready to help in a huge way, focusing first on victims in Florida, which took the brunt of one of the strongest storms to make landfall in the United States.

Flooded roadways and washed-out bridges to barrier islands left many people isolated amid limited cell phone service and a lack of basic amenities such as water, electricity and the Internet.

And officials warned that the situation in many areas isn't expected to improve for several days because all of the rain that fell has nowhere to go since waterways are overflowing.

About 750,000 homes and businesses in Florida were still without electricity Sunday, down from a peak of 2.6 million.