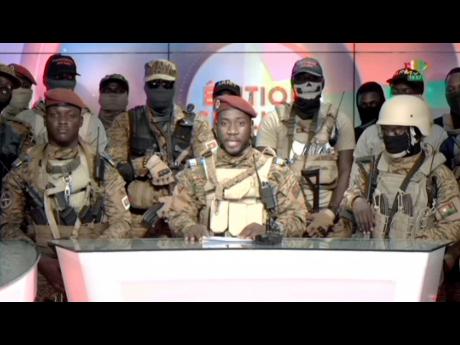 AP
In this image from a video broadcast by RTB state television, coup spokesman Capt Kiswendsida Farouk Azaria Sorgho reads a statement in a studio in Ouagadougou, Burkina Faso, on Friday evening, September 30.

Burkina Faso’s new junta leadership called for an end to the unrest on Sunday, a day after angry protesters attacked the French Embassy and other buildings following the West African nation’s second coup this year.

In a statement broadcast on state television, junta spokesman Capt Kiswendsida Farouk Azaria Sorgho called on people to “desist from any act of violence and vandalism to prevent the efforts made since (Friday) night, especially those that could be perpetrated against the French Embassy or the French military base”.

Saturday’s violence has been condemned by the French foreign ministry, which denied any involvement in the events unfolding in Ouagadougou, the capital.

“We condemn in the strongest terms the violence against our diplomatic presence in Burkina Faso,” the French foreign ministry said late Saturday. “Any attack on our diplomatic facilities is unacceptable.”

Anti-French sentiment rose sharply after an earlier junta announcement alleged that ousted interim President Lt Col Paul Henri Sandaogo Damiba was sheltering at a French military base. France vehemently denied the allegation, but soon protesters with torches thronged the perimeter of the French Embassy in Ouagadougou.

Damiba’s whereabouts were still unknown on Sunday, though a statement attributed to him was posted on the Burkina Faso presidency’s Facebook page late Saturday. In it, he called on the new coup leaders “to come to their senses to avoid a fratricidal war that Burkina Faso does not need”.

Unlike other ousted West African leaders, Damiba has yet to issue a resignation, though the junta said he has been removed from power in their announcement on Friday night on state television.

The events unfolding in Burkina Faso have deepened fears that the political chaos will divert attention from the country’s unabated Islamic insurgency, a crisis that has forced two million people from their homes and left thousands dead in recent years.

Damiba came to power in January promising to secure the country from jihadi violence. However, the situation only deteriorated as jihadis imposed blockades on towns and have intensified attacks. Last week, at least 11 soldiers were killed and 50 civilians went missing after a supply convoy was attacked by gunmen in Gaskinde commune in the Sahel. The group of officers led by Capt Ibrahim Traore said on Friday that Damiba had failed and was being removed.

Conflict analysts say Damiba was probably too optimistic about what he could achieve in the short term, which raised expectations, but that a change at the top didn’t mean that the country’s security situation would improve.