Mayor declares state of emergency for NYC over migrants 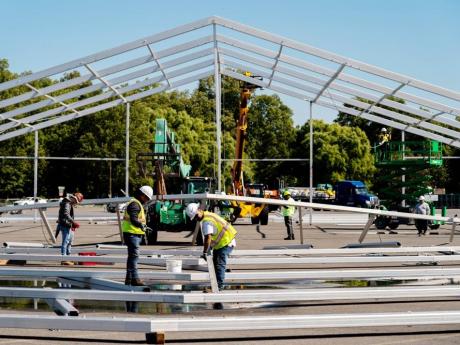 Workers erect a hangar-sized tent, September 27, 2022, in the parking lot of Orchard Beach, in the Bronx borough of New York, as temporary shelter for thousands of international migrants who have been bused into the Big Apple. New York City's mayor Eric Adams declared a state of emergency on Friday, October 7, over the thousands of migrants being sent from southern border states since the spring, saying the demand being put on the city to provide housing and other assistance is "not sustainable." (AP Photo/Julia Nikhinson, File)

New York City's mayor declared a state of emergency on Friday over the thousands of migrants being sent from southern border states since the spring, saying the demand being put on the city to provide housing and other assistance is “not sustainable.”

“A city recovering from an ongoing global pandemic is being overwhelmed by a humanitarian crisis made by human hands,” Mayor Eric Adams said.

By the end of its fiscal year, Adams said the city expected to spend $1 billion helping the new arrivals, many of whom are heavily reliant on government aid because federal law prohibits them from working in the United States.

The administration did not specify what costs are being included in that amount.

Adams, a Democrat, said the new arrivals are welcome in the city.

And he spoke with pride of New York City's history as a landing spot for new immigrants.

“New Yorkers have always looked out for our immigrant brothers and sisters. We see ourselves in them. We see our ancestors in them,” he said.

But, he said, “though our compassion is limitless, our resources are not.”