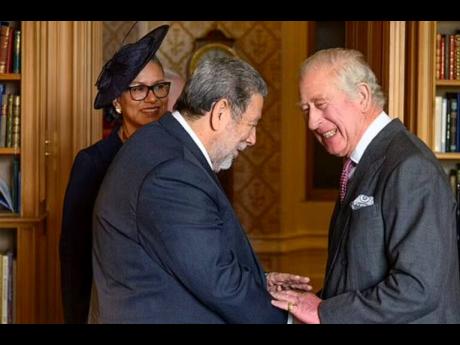 Prime Minister Dr Ralph Gonsalves says his opposition to the British monarchy as sovereign of St Vincent and the Grenadines does not mean that he should disrespect King Charles III.

He made the point as he responded to opposition lawmaker St Clair Leacock, who said Gonsalves’ meeting with the king in Scotland on Saturday showed “barefacedness”.

“I saw a picture with Ralph, and – let me be circumspect – the king in England and I didn’t know who was who,” Leacock said Monday on ‘New Times’, his party’s programme on NICE Radio.

“Ralph’s presence in England on the weekend to meet the King of England is the highest, most demonstrative level of political fraud ever seen or heard in my lifetime. It will be difficult to see more barefacedness than that,” he added.

However, Gonsalves said that Leacock was engaged in “loose talk”.

“And he gets looser by the day, and apparently a long period in opposition has certainly addled his brain,” said Gonsalves, whose Unity Labour Party has been in office for 21 consecutive years.

“It is well known, and King Charles III himself knows, that I am not in favour of a monarchical system for St Vincent and the Grenadines, and I am not in favour of a British or foreign person to be head of state of our country,” he said, noting that this did not mean he must not communicate with the sovereign. “[But] I have to have the respect.”

“So, not because I am not in favour of a monarchical system, I’m just going to be disrespectful to the king or to the British monarch. That’s imbecilic; it’s infantile.”

Gonsalves further noted that the king is the titular head of the Commonwealth, in addition to being monarch here, with the governor general as his representative.

“The Commonwealth is important to him and he has said that publicly, and St. Vincent and the Grenadines is a member of the Commonwealth,” he said.

In a 2009 referendum, Gonsalves’ government failed to convince the electorate to remove the British monarch as head of state in favour of a non-executive president.