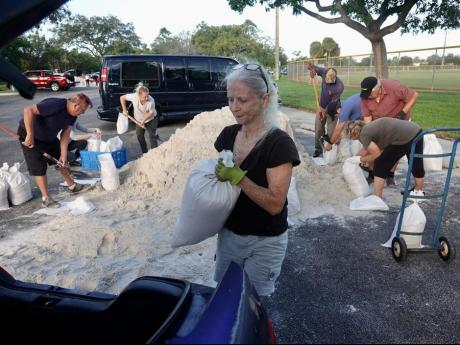 MIAMI (AP) — Nicole strengthened to a tropical storm Tuesday as it churned toward the northwestern Bahamas and Florida's Atlantic coastline, forecasters said.

A range of warnings and watches remain in place. Many areas are still reeling from damage caused by Hurricane Ian, which hit Florida's southwestern Gulf Coast as a Category Four storm in late September, before dumping heavy amounts of rain across much of the central part of the state.

Hurricane warnings were in effect for the Abacos, Berry Islands, Bimini and Grand Bahama Island, the Miami-based National Hurricane Center said in an advisory. Other areas of the Bahamas, including Andros Island, New Province and Eleuthera remained under a tropical storm warning.

The hurricane center said the storm's track shifted slightly north overnight, but the exact path remains uncertain as it approaches Florida, where it is expected to make landfall as a Category One hurricane late Wednesday or early Thursday.

On Tuesday morning, hurricane warnings were issued for a large portion of Florida's Atlantic Coast, from Boca Raton to north of Daytona Beach. Tropical storm warnings are in place for other parts of the Florida coast, all the way to Altamaha Sound, Georgia. The warning area also stretches inland, covering Florida's Lake Okeechobee, with tropical storm watches in effect on the state's Gulf Coast — from Bonita Beach in southwest Florida to the Ochlockonee River in the Panhandle.