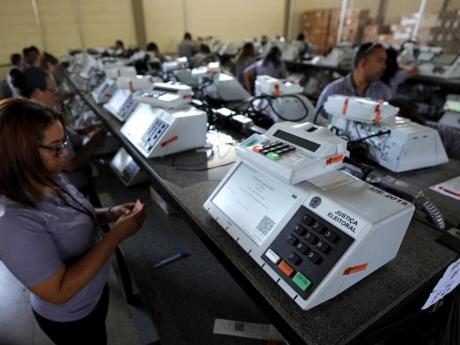 Electoral Court employees work on the final stage of sealing electronic voting machines in preparation for the general election run-off in Brasilia, Brazil, October 19, 2022, ahead of the October 30 second round vote. Valdemar Costa, president of the ruling Liberal Party, is calling on the electoral authority to annul votes cast on more than half of electronic voting machines used in the election, citing a software bug. (AP Photo/Eraldo Peres, File)

BRASILIA, Brazil (AP) — Brazilian President Jair Bolsonaro is contesting his defeat in the October election and calling on the electoral authority to annul votes cast on most of the nation's electronic voting machines, citing a software bug that independent experts have said didn't affect the reliability of results.

Such an action would leave Bolsonaro with 51 per cent of the remaining valid votes, and a re-election victory, Marcelo de Bessa, the lawyer who filed the 33-page request on behalf of the president and his Liberal Party, told reporters on Tuesday.

The electoral authority has already declared victory for Bolsonaro's nemesis, leftist former President Luiz Inácio Lula da Silva, and leading politicians, including many of the president's allies, have accepted the results.

Protesters in cities across the country have steadfastly refused to do the same, particularly with Bolsonaro declining to concede.

Party leader Valdemar Costa and an auditor hired by the party told reporters in Brasilia that their evaluation found all machines dating from before 2020, nearly 280,000 of them, or about 59 per cent of the total used in the October 30 runoff, lacked individual identification numbers in internal logs.

Neither explained how that might have affected election results, but said they were asking the electoral authority to invalidate all votes cast on those machines.

Immediately afterward, Alexandre de Moraes, who presides over the electoral authority, said the court would not consider the complaint unless the party offers a new report within 24 hours that would include results from the first electoral round on October 2, in which the Liberal Party won more seats in both congressional houses than any other.

Bolsonaro's less than two-point loss to da Silva on October 30 was the narrowest margin since Brazil's 1985 return to democracy.