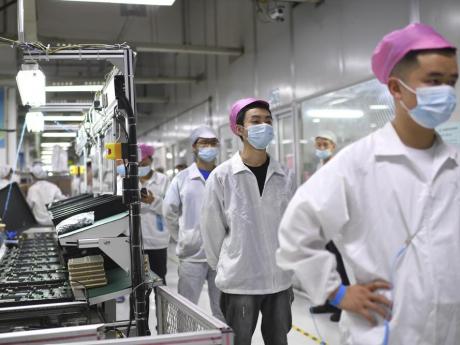 Workers line up to get tested for COVID-19 at the Foxconn factory in Wuhan in central China's Hubei province on August 5, 2021. (Chinatopix via AP, File)

Foxconn, a contract assembler that makes the global smartphone industry possible, didn't have enough workers to make the new iPhone 14. Around China, labourers are housed in “closed loops” of dorms isolated from the general population, making it harder to recruit workers.

China has waged the future of the world's largest economy on contract manufacturers like Foxconn's. It's also betting on its ability to control COVID with some of the world's strictest anti-virus controls.

Those two wagers came into violent conflict Tuesday night in the central city of Zhengzhou.

To lure workers for the iPhone 14, which sells starting at $799 in the US, Foxconn announced enticements for Zhengzhou workers to come back, and to hire new ones.

Foxconn does not release pay figures, but that package would be a roughly 50 percent increase over the top end of the pay range for big employers in the area.

Workers travelled long distances to the factory, only to be told they had to work two additional months at lower pay to receive the 25,000 yuan, Li said.