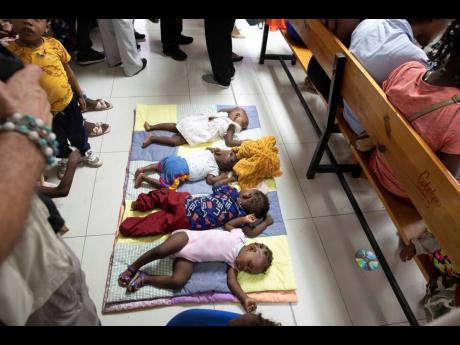 AP
Babies sleep as their parents wait their turn to have them checked for symptoms of malnutrition at the Gheskio Centre in Port-au-Prince, Haiti, on Monday, November 21. Manuel Fontaine, director of UNICEF’s Office of Emergency Programmes, visited the centre that day.

The United Nations Children’s Fund (UNICEF) on Wednesday said children account for roughly 40 per cent of the confirmed cholera cases in Haiti, as it appealed for US$27.5 million to save more lives from the disease.

The outbreak began two months ago and is unfolding amid economic crisis and rising insecurity due to gang violence. Ninety per cent of confirmed cases have been in areas with a high burden of severe acute malnutrition. UNICEF said children suffering from the condition, which is also known as severe wasting, are more vulnerable to cholera and at least three times more at risk of dying from it.

“In Haiti right now, there is a triple threat to children’s lives – malnutrition, cholera and armed violence. And sometimes all three together,” said Manuel Fontaine, director of UNICEF’s Office of Emergency Programmes, who has ended a four-day visit to the French-speaking Caribbean Community country. Fontaine was able to view first-hand how malnourished children are receiving life-saving care at UNICEF-supported cholera treatments in the capital, and in the Cité Soleil neighbourhood there.

“I was shocked to see many children at risk of dying in the cholera treatment centres. In just a few hours, acute watery diarrhoea and vomiting dehydrate and weaken them so much, they may die without timely and adequate treatment. Cholera and malnutrition are a lethal combination, one leading to the other,” he said. The senior official also went to a centre which provides medical, psychological, and psychosocial care to survivors of gender-based violence.

As of Monday, there were 924 confirmed cholera cases in Haiti, more than 10,600 suspected cases, and 188 deaths, according to the Ministry of Health.

But Fontaine remained adamant that the “vicious cycle” between malnutrition and cholera can be broken. “Simple, affordable and effective treatment can save Haitian children’s lives, as long as we reach the most vulnerable families before it’s too late,” he said.

“But the urban-poor areas most affected by the cholera outbreak are also under the control of heavily armed gangs. Amid widespread armed violence and insecurity in large parts of the capital, humanitarian teams are walking on eggshells.”

UNICEF said it is seeking the funding to ramp up its cholera response over the next five months. It said the US$27.5 million will be used to provide humanitarian assistance in the areas of health, water, hygiene and sanitation, as well as nutrition and protection, for 1.4 million people