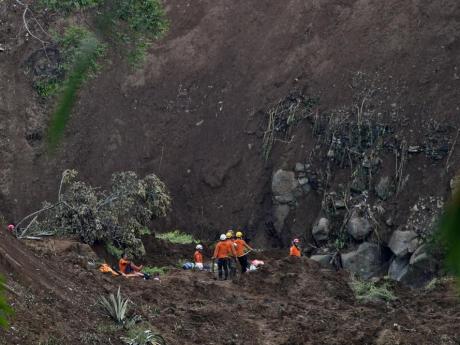 Rescuers search for victims at the site where an earthquake-triggered landslide hit in Cianjur, West Java, Indonesia, Friday, November 25, 2022. The quake on Monday killed hundreds of people, many of them children, and injured thousands. (AP Photo/Achmad Ibrahim)

CIANJUR, Indonesia (AP) — The death toll from an earthquake that struck Indonesia's Java island early this week rose to 310 after rescuers found more bodies under landslides, an official said.

Others held prayers along with rescuers between the tents at evacuation centres.

More than 1,400 rescuers have been searching through the rubble since the magnitude 5.6 quake, which injured more than 2,000 people.

The head of the National Disaster Management Agency, Suharyanto, who uses one name, said rescuers will continue searching until rebuilding begins.

The disaster agency said the earthquake damaged at least 56,000 houses and displaced at least 36,000 people.

Hundreds of public facilities were destroyed, including 363 schools.