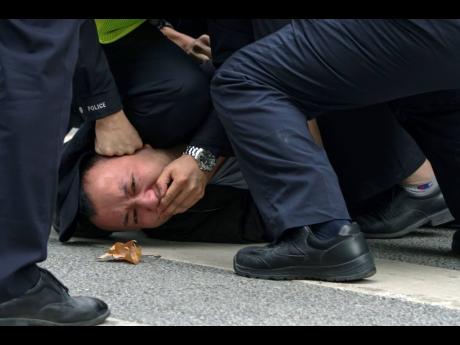 AP
Policemen pin down and arrest a protester during a protest on a street in Shanghai, China. Authorities eased anti-virus rules in scattered areas but affirmed China’s severe ‘zero- COVID’ strategy Monday after crowds demanded President Xi Jinping resign during protests against controls that confine millions of people to their homes.

Barely a month after granting himself new powers as China’s potential leader for life, Xi Jinping is facing a wave of public anger of the kind not seen for decades, sparked by his “zero COVID” strategy, which will soon enter its fourth year.

Demonstrators poured into the streets over the weekend in cities including Shanghai and Beijing, criticising the policy, confronting police – and even calling for Xi to step down. On Monday, demonstrators gathered in the semi-autonomous southern city of Hong Kong, where the pro-democracy movement was all but snuffed out by a harsh crackdown following months long demonstrations that began in 2019.

Students at the Chinese University of Hong Kong chanted “oppose dictatorship” and “Freedom! Freedom!” Floral tributes were laid in the Central district that had been the epicentre of previous protests.

The widespread demonstrations are unprecedented since the army crushed the 1989 student-led pro-democracy movement centred on Beijing’s Tiananmen Square.

Most protesters focused their anger on restrictions that can confine families to their homes for months and have been criticised as neither scientific nor effective. Some complained that the system is failing to respond to their needs.

The cries for the resignation of Xi and the end of the Communist Party that has ruled China for 73 years could be deemed sedition, which is punishable by prison.

In response, police in Shanghai used pepper spray to drive away demonstrators, and dozens were detained in police sweeps and taken away in police vans and buses. China’s vast internal security apparatus is also famed for identifying people it considers troublemakers and picking them up later when few are watching.

The possibility of more protests is unclear. Government censors scrubbed the Internet of videos and messages supporting them. And analysts say that unless divisions emerge, the Communist Party should be able to contain the dissent.

China’s stringent measures were originally accepted for minimising deaths while other countries suffered devastating waves of infections, but that consensus has begun to fray in recent weeks.

While the ruling party says anti-coronavirus measures should be “targeted and precise” and cause the least possible disruption to people’s lives, local officials are threatened with losing their jobs or other punishments if outbreaks occur. They have responded by imposing quarantines and other restrictions that protesters say exceed what the central government allows.

The party has long imposed surveillance and travel restrictions on minorities including Tibetans and Muslim groups such as Uyghurs, more than one million of whom have been detained in camps where they are forced to renounce their traditional culture and religion and swear fealty to Xi.