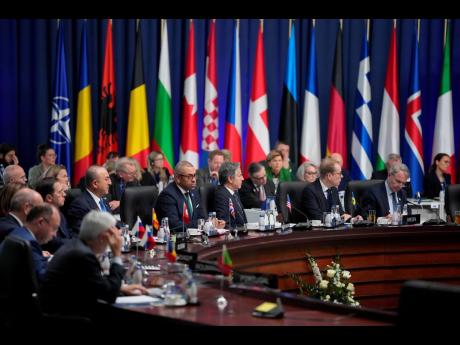 NATO doubled down Tuesday on its commitment to one day include Ukraine, a pledge that some officials and analysts believe helped prompt Russia’s invasion this year. The world’s largest security alliance also pledged to send more aid to Ukrainian forces locked in battle with Russian troops.

He highlighted that North Macedonia and Montenegro had recently joined NATO, and said Russian President Vladimir Putin “will get Finland and Sweden as NATO members” soon. The Nordic neighbours applied for membership in April, concerned that Russia might target them next.

“Russia does not have a veto” on countries joining, Stoltenberg said. “We stand by that, too, on membership for Ukraine.”

When they met in Bucharest in 2008, NATO leaders said Ukraine and Georgia would join the alliance one day.

Some officials and analysts believe that declaration – pressed on the NATO allies by former US President George W. Bush – was partly responsible for the war that Russia launched on Ukraine in February. In justifying his invasion on February 24, Putin cited threats to Russia’s security from Ukraine’s ambitions to join NATO.

“President Putin cannot deny sovereign nations to make their own sovereign decisions that are not a threat to Russia,” the former Norwegian prime minister said. “I think what he’s afraid of is democracy and freedom, and that’s the main challenge for him.”

Ukraine applied for “accelerated accession” to NATO on September 30 but will not join any time soon. With the Crimean Peninsula annexed, and Russian troops and pro-Moscow separatists holding parts of the south and east, it’s not clear what Ukraine’s borders would even look like.

Many of NATO’s 30 members believe the focus now must solely be on defeating Russia, and Stoltenberg stressed that any attempt to move ahead on membership could divide them.

“We are in the midst of a war and therefore we should do nothing that can undermine the unity of allies to provide military, humanitarian, financial support to Ukraine, because we must prevent President Putin from winning,” he said.

Beyond Ukraine’s immediate needs, NATO wants to see how it can help the country longer-term, by upgrading its Soviet-era equipment to the alliance’s modern standards and providing more military training.

Slovak Foreign Minister Rastislav Kacer said the allies must help Ukraine so “the transition to full membership will be very smooth and easy” once both NATO and Kyiv are ready for accession talks.

In a statement, the ministers vowed to help Ukraine rebuild once the war is over, saying: “We will continue to strengthen our partnership with Ukraine as it advances its Euro-Atlantic aspirations.”