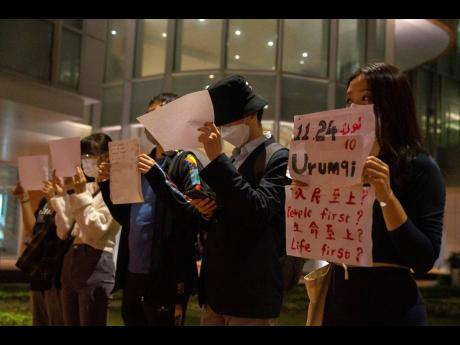 AP
Protesters hold up white paper, some with writings commemorating the November 24 deadly Urumqi fire, during a gathering at the University of Hong Kong in Hong Kong yesterday.

Chinese universities sent students home and police fanned out in Beijing and Shanghai to prevent more protests Tuesday after crowds angered by severe anti-virus restrictions called for leader Xi Jinping to resign in the biggest show of public dissent in decades.

Authorities have eased some controls after demonstrations in at least eight mainland cities and Hong Kong but maintained they would stick to a “zero-COVID” strategy that has confined millions of people to their homes for months at a time. Security forces have detained an unknown number of people and stepped up surveillance.

With police out in force, there was no word of protests Tuesday in Beijing, Shanghai or other major mainland cities that were the scene last weekend of the most widespread protests since the army crushed the 1989 student-led Tiananmen Square pro-democracy movement.

In Hong Kong, about a dozen people, mostly from the mainland, protested at a university.

Beijing’s Tsinghua University, where students protested over the weekend, and other schools in the capital and the southern province of Guangdong sent students home. The schools said they were being protected from COVID-19, but dispersing them to far-flung hometowns also reduces the likelihood of more demonstrations. Chinese leaders are wary of universities, which have been hotbeds of activism including the Tiananmen protests.

On Sunday, Tsinghua students were told they could go home early for the semester. The school, which is Xi’s alma mater, arranged buses to take them to the train station or airport.

Nine student dorms at Tsinghua were closed Monday after some students positive for COVID-19, according to one who noted the closure would make it hard for crowds to gather. The student gave only his surname, Chen, for fear of retribution from authorities.

Beijing Forestry University also said it would arrange for students to return home. It said its faculty and students all tested negative for the virus.

Authorities hope to “defuse the situation” by clearing out campuses, said Dali Yang, an expert on Chinese politics at the University of Chicago.

Depending on how tough a position the government takes, groups might take turns protesting, he said.

Police appeared to be trying to keep their crackdown out of sight, possibly to avoid drawing attention to the scale of the protests or encouraging others. Videos and posts on Chinese social media about protests were deleted by the ruling party’s vast online censorship apparatus.

There were no announcements about detentions, though reporters saw protesters taken away by police, and authorities warned some detained protesters against demonstrating again.