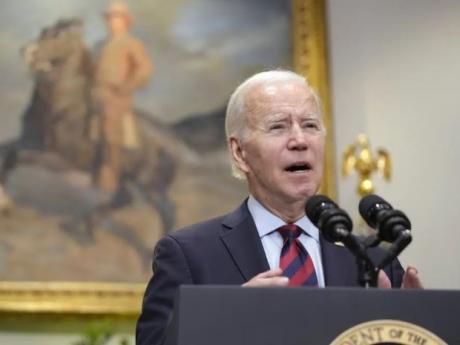 President Joe Biden speaks before signing H.J.Res.100, a bill that aims to avert a freight rail strike, in the Roosevelt Room at the White House, Friday, December 2, 2022, in Washington. (AP Photo/Manuel Balce Ceneta)

WASHINGTON (AP) — President Joe Biden assured Americans on Friday that the US economy is chugging along in the holiday season, but the very strength of a new jobs report showed that high inflation remains a recession threat.

At the White House, the president signed an emergency bill to avert a rail strike that he said could have caused 765,000 job losses in two weeks and plunged the country into a painful downturn.

But many voters and economists still fear that a recession is nigh and the price of reducing high prices will be layoffs.

Biden pointed to the addition of 263,000 jobs in November — with the unemployment rate holding steady at 3.7% — as proof that his policies have bulked up the economy.

He suggested that the major recession risk was the freight rail strike, a problem the country avoided by having Congress impose an agreement that raises pay but fails to provide the additional paid sick leave that workers demanded.

“Things are moving — they're moving in the right direction,” Biden said.

“As we go into the holiday season, here's what this all means: The Americans are working, the economy is growing.”