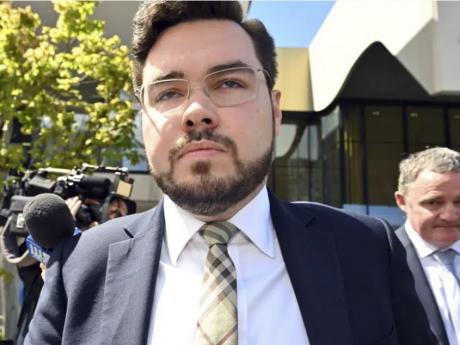 Former Liberal Party staffer Bruce Lehrmann leaves the ACT Supreme Court in Canberra, on October 27, 2022. An Australian prosecutor says he dropped a rape charge against Lehrmann, a former government adviser, Friday, December 2, 2022, because of the life-threatening trauma a trial would cause the woman allegedly assaulted in a Parliament House office. (Mick Tsikas/AAP Image via AP)

CANBERRA, Australia (AP) — An Australian prosecutor on Friday dropped the rape charge of a woman who was allegedly assaulted in a parliamentary office after he determined that the stress of the trial would put her life at risk.

Former government staffer Brittany Higgins alleges a more senior colleague, Bruce Lehrmann, raped her in a minister's office after a night of heavy drinking in March 2019.

The Associated Press does not usually identify alleged victims of sexual assault, but Higgins has chosen to identify herself in the media.

Higgins was in a hospital receiving mental health treatment after the past “difficult and unrelenting” two years, her friend Emma Webster said in a media statement.

Director of Public Prosecutions Shane Drumgold said he dropped the case based on medical evidence that a trial could cost Higgins' life.

“I've recently received compelling evidence from two independent medical experts that the ongoing trauma associated with this prosecution presents a significant and unacceptable risk to the life of the complainant,” Drumgold told reporters.

Drumgold said there was a “reasonable prospect” that a trial would end in a conviction.