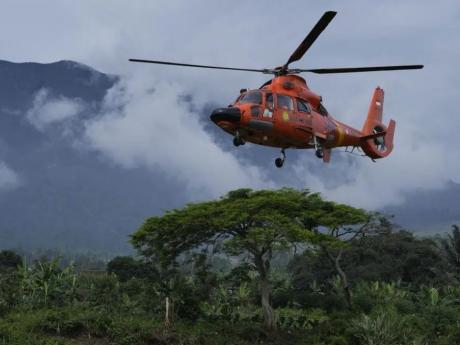 Members of the National Search and Rescue Agency (BASARNAS) fly a helicopter to deliver relief goods to a village affected by Monday's earthquake in Cianjur, West Java, Indonesia, Saturday, November 26, 2022. The magnitude 5.6 quake killed hundreds of people, many of them children, and displaced tens of thousands. (AP Photo/Achmad Ibrahim)

The US Geological Survey said the magnitude 5.7 quake was centred about 18 kilometres (11 miles) southeast of Banjar, a city between West Java and Central Java provinces, at a depth of 112 kilometres (70 miles).

One resident was injured in Selaawi village of West Java's Garut district, and at least four houses and a school were damaged, said Suharyanto, the National Disaster Management Agency head who goes by a single name.

He said authorities were still collecting information about the damage.

It was the deadliest in Indonesia since a 2018 quake and tsunami in Sulawesi killed about 4,340 people. It also struck at a shallower depth of 10 kilometres (6.2 miles).

Many in Garut are still haunted by the disaster that devastated Cianjur and set off landslides, the district chief, Rudi Gunawan, said in a television interview.

“The earthquake has caused extreme panic among people amid monsoon downpour,” he said, adding that his administration had alerted hospitals, health centres and ambulances to be ready to treat possible victims.

Apart from the one injured, by Saturday evening there were no other casualties reported from all 42 villages in Garut, one of the closest district to the epicentre, Gunawan said. Many houses suffered minor damage.