El Salvador sends 10,000 police, soldiers to seal off town in search for gangs 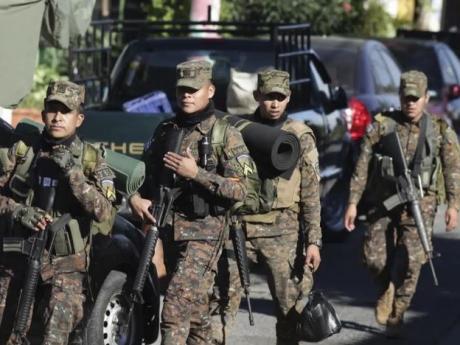 Soldiers arrive in Soyapango, El Salvador, Saturday, December 3, 2022. The government of El Salvador sent 10,000 soldiers and police to seal off Soyapango, on the outskirts of the nation’s capital Saturday to search for gang members. (AP Photo/Salvador Melendez)

SAN SALVADOR, El Salvador (AP) — The government of El Salvador sent 10,000 soldiers and police to seal off a town on the outskirts of the nation's capital Saturday to search for gang members.

The operation was one of the largest mobilisations yet in President Nayib Bukele's nine-month-old crackdown on street gangs that long extorted money from businesses and ruled many neighbourhoods of the capital, San Salvador.

The troops blocked roads going in and out of the township of Soyapango, checking people's documents. Special teams went into the town looking for gang suspects.

More than 58,000 people have been jailed since a state of emergency was declared following a wave of homicides in late March.

Rights groups have criticised the mass roundups, saying they often sweep up young men based on their appearance or where they live.