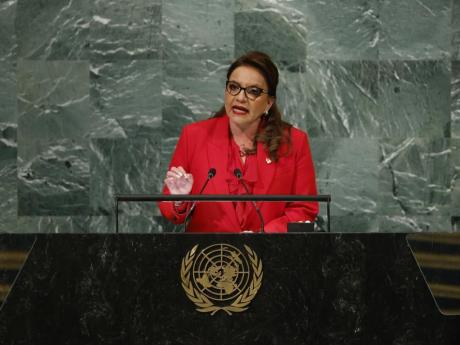 Honduras' President Xiomara Castro addresses the 77th session of the United Nations General Assembly at UN headquarters in New York, September 20, 2022. Honduras became the second country in Central America to declare a state of emergency to fight gang crimes like extortion. Late Thursday, November 24, Castro proposed a measure to limit constitutional rights so as to round up gang members. (AP Photo/Jason DeCrow, File)

The extraordinary measures target the capital Tegucigalpa and the northern business hub of San Pedro Sula, which have both struggled under the sway of powerful gangs like Barrio 18 and MS-13.

The decree published Monday will last one month, but lawmakers will have the ability to extend it, something that has happened repeatedly in El Salvador since a state of exception was imposed in March.

The decree gave as justification the threat to life and property posed by the gangs in both cities.

Retired National Police Commissioner Leandro Osorio said the measures would not only seek to prevent crime but would also carry repressive actions.

“The intent is to penetrate these criminal structures to get to the (leaders),” Osorio said, noting that it would also be important to go after lesser criminals, as well as repeat offenders.

Still, Osorio said it would be difficult and require cooperation throughout the criminal justice system and all of government.

While noting that El Salvador's example was indeed “authoritarian,” Pineda said that it was showing real results in terms of the precipitous drop in homicides.

“What is being applied in Honduras is an imitation,” Pineda said.