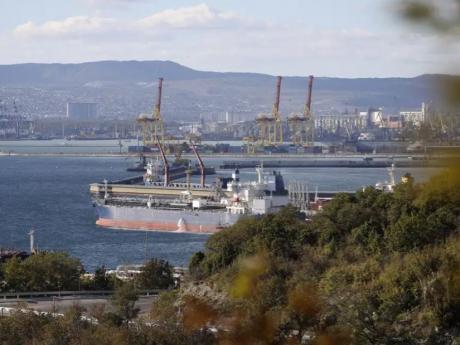 An oil tanker is moored at the Sheskharis complex, part of Chernomortransneft JSC, a subsidiary of Transneft PJSC, in Novorossiysk, Russia, on October 11, 2022, one of the largest facilities for oil and petroleum products in southern Russia. Oil prices rose Monday, December 5, 2022, as the first strong measures to limit Russia's oil profits over the war in Ukraine took effect, bringing with them uncertainty about how much crude could be lost to the global economy through the new sanctions or Russian retaliation. (AP Photo, File)

FRANKFURT, Germany (AP) — Major Western measures to limit Russia's oil profits over the war in Ukraine took effect Monday, bringing with them uncertainty about how much crude could be lost to the world and whether they will unleash the hoped-for hit to a Russian economy that has held up better than many expected under sanctions.

In the most far-reaching efforts so far to target one of Moscow's main sources of income, the European Union is banning most Russian oil and the Group of Seven democracies has imposed a price cap of $60 per barrel on Russian exports to other countries.

The impact of both measures, however, may be blunted because the world's No. 2 oil producer has so far been able reroute much of its European seaborne shipments to China, India and Turkey, although at steep discounts, and the price cap is near what Russian oil already cost.

As it stands, Russia will likely have enough money to not only fund its military but support key industries and social programs, said Chris Weafer, CEO and Russian economy analyst at consulting firm Macro-Advisory.

“At this price level, that outlook really doesn't change much. But what is key is how much volume Russia would be able to sell,” he said.

“And that depends not only on the willingness of Asian buyers to continue buying Russian oil, but also what is the physical ability of Russia to shift that oil.”

Western leaders are walking a fine line between trying to cut Russia's oil income and preventing an oil shortage that would cause a price spike and worsen the inflation plaguing economies and hurting consumers worldwide.

They could later agree to lower the price cap to increase pressure on Russia, which says it will not sell to countries that observe the limit.