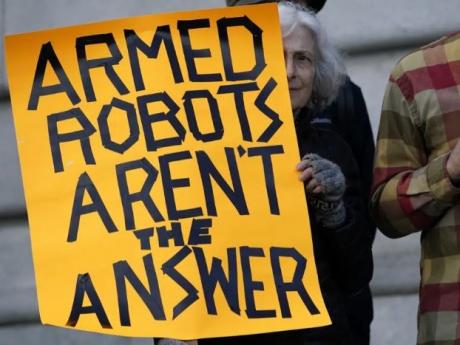 Diana Scott holds up a sign while taking part in a demonstration about the use of robots by the San Francisco Police Department outside of City Hall in San Francisco, Monday, December 5, 2022. San Francisco supervisors have voted to put the brakes on a controversial policy that would let police use robots for deadly force. The Board of Supervisors voted Tuesday to send the issue back to a committee for further discussion. (AP Photo/Jeff Chiu, File)

SAN FRANCISCO (AP) — San Francisco supervisors voted Tuesday to put the brakes on a controversial policy that would have let police use robots for deadly force, reversing course just days after their approval of the plan generated fierce pushback and warnings about the militarisation and automation of policing.

The Board of Supervisors voted unanimously to explicitly ban the use of robots in such a fashion for now.

But they sent the issue back to a committee for further discussion and could vote in the future to let police use robots in a lethal manner in limited cases.

The board voted last week to allow the use of deadly robots in extreme circumstances.

The police department said it had no plans to arm the robots with guns but wanted the ability to put explosives on them and use then to contact, incapacitate or disorient dangerous or armed suspects when lives are at risk.

The initial vote thrust the famously liberal city into the centre of a debate about the future of technology and policing, with some saying arming robots was a step too close to something one would see in a dystopian science fiction movie.

Though robot technology for policing has become more widely available, departments across the country have rarely used it to confront or kill suspects.