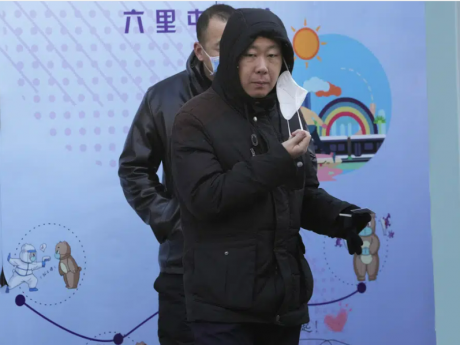 A resident pulls away a mask during COVID test in Beijing, Wednesday, December 7, 2022. In a sharp reversal, China has announced a series of measures rolling back some of the most draconian anti-COVID-19 restrictions. (AP Photo/Ng Han Guan)

BEIJING (AP) — China rolled back rules on isolating people with COVID-19 and dropped virus test requirements for some public places Wednesday in a dramatic change to a strategy that confined millions of people to their homes and sparked protests and demands for President Xi Jinping to resign.

The move adds to earlier easing that fuelled hopes Beijing was scrapping its “zero COVID” strategy, which is disrupting manufacturing and global trade.

Experts warn, however, that restrictions can't be lifted completely until at least mid-2023 because millions of elderly people still must be vaccinated and the health care system strengthened.

China is the last major country still trying to stamp out transmission of the virus while many nations switch to trying to live with it. As they lift restrictions, Chinese officials have also shifted to talking about the virus as less threatening — a possible effort to prepare people for a similar switch.

People with mild cases will be allowed for the first time to isolate at home, the National Health Commission announced, instead of going to sometimes overcrowded or unsanitary quarantine centre's. That addresses a major irritation that helped to drive protests that erupted November 25 in Shanghai and other cities.

Public facilities except for “special places,” such as schools, hospitals and nursing homes, will no longer require visitors to produce a “health code” on a smartphone app that tracks their virus tests and whether they have been to areas deemed at high risk of infection.

Local officials must “take strict and detailed measures to protect people's life, safety and health” but at the same time “minimise the impact of the epidemic on economic and social development,” the statement said.

China's restrictions have helped to keep case numbers low, but that means few people have developed natural immunity, a factor that might set back reopening plans if cases surge and authorities feel compelled to reimpose restrictions.