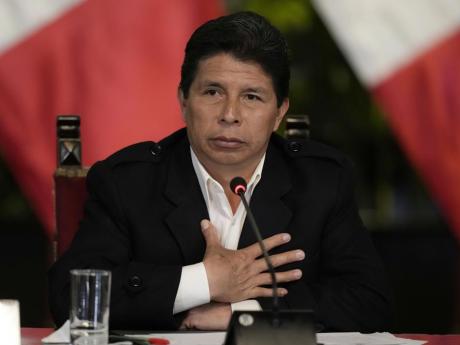 LIMA, Peru (AP) — The president of Peru was ousted by Congress and arrested on a charge of rebellion Wednesday after he sought to dissolve the legislative body and take unilateral control of the government, triggering a grave constitutional crisis.

Vice President Dina Boluarte replaced Pedro Castillo and became the first female leader in the history of the republic after hours of wrangling between the legislature and the president, who had tried to prevent an impeachment vote.

Boluarte, a 60--year-old lawyer, called for a political truce and the installation of a national unity government.

“What I ask for is a space, a time to rescue the country,” she said.

Lawmakers voted 101-6 with 10 abstentions to remove Castillo from office for reasons of “permanent moral incapacity.”

He left the presidential palace in an automobile that carried him through Lima's historic downtown.

He entered a police station and hours later federal prosecutors announced that Castillo had been arrested on the rebellion charge for allegedly violating constitutional order.

Witnesses saw some small-scale clashing between police and some protesters who had gathered near the station.