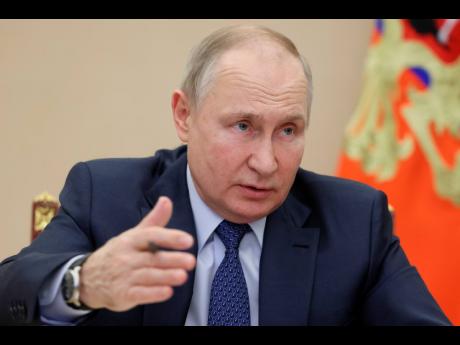 Mikhail Metzel
Russian President Vladimir Putin gestures while speaking during the annual meeting of the Presidential Council for Civil Society and Human Rights via videoconference in Moscow, Russia, on Wednesday.

Russian President Vladimir Putin acknowledged on Wednesday that his “special military operation” in Ukraine is taking longer than expected, but hailed the seizure of his neighbour’s territory as a major achievement and said his country’s nuclear weapons are deterring escalation of the conflict.

“Of course, it could be a lengthy process,” Putin said of the more than nine-month-old war that began with Russia’s invasion on February 24 and has displaced millions from their homes, and killed and wounded tens of thousands. Despite its length, he showed no signs of letting up, vowing to “consistently fight for our interests” and to “protect ourselves using all means available”. He reiterated his claim that he had no choice but to send in troops, saying that for years, the West responded to Russia’s security demands with “only spit in the face”.

Speaking in a televised meeting in Russia with members of his Human Rights Council, Putin described the land gains as “a significant result for Russia”, noting that the Sea of Azov “has become Russia’s internal sea”. In one of his frequent historic references to a Russian leader he admires, he added that “Peter the Great fought to get access” to that body of water.

After failing to take Kyiv due to fierce Ukrainian resistance, Russia seized broad swathes of southern Ukraine at the start of the invasion and captured the key Sea of Azov port of Mariupol in May after a nearly three-month siege. In September, Putin illegally annexed four Ukrainian regions even though his forces didn’t completely control them: Kherson and Zaporizhzhia in the south, and Donetsk and Luhansk in the east. In 2014, he had illegally annexed Ukraine’s Crimean Peninsula.

In response to an increasing influx of advanced Western weapons, economic, political and humanitarian aid to Kyiv, and what he saw as Western leaders’ inflammatory statements, Putin has periodically hinted at his potential use of nuclear weapons. When a member of the Human Rights Council asked him on Wednesday to pledge that Russia would not be the first to use such weapons, Putin demurred. He said Russia would not be able to use nuclear weapons at all if it agreed not to use them first and then came under a nuclear strike.

“If it doesn’t use it first under any circumstances, it means that it won’t be the second to use it either, because the possibility of using it in case of a nuclear strike on our territory will be sharply limited,” he said.

Putin rejected Western criticism that his previous nuclear weapons comments amounted to saber-rattling, claiming they were “not a factor provoking an escalation of conflicts, but a factor of deterrence”.

“We haven’t gone mad. We are fully aware of what nuclear weapons are,” Putin said. He added, without elaborating: “We have them, and they are more advanced and state-of-the-art than what any other nuclear power has.”