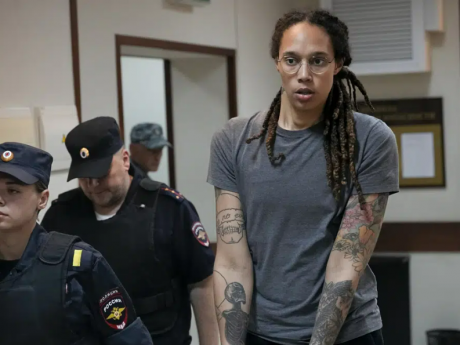 WNBA star and two-time Olympic gold medalist Brittney Griner is escorted from a courtroom after a hearing in Khimki just outside Moscow, on August 4, 2022. Russia has freed WNBA star Brittney Griner on Thursday in a dramatic high-level prisoner exchange, with the US releasing notorious Russian arms dealer Viktor Bout. (AP Photo/Alexander Zemlianichenko, File)

The swap, at a time of heightened tensions over Ukraine, achieved a top goal for President Joe Biden, but carried a heavy price and left behind an American jailed for nearly four years in Russia.

The deal, the second such exchange in eight months with Russia, procured the release of the most prominent American detained abroad.

Griner is a two-time Olympic gold medallist whose monthslong imprisonment on drug charges brought unprecedented attention to the population of wrongful detainees.

Biden's authorisation to release a Russian felon once nicknamed “the Merchant of Death” underscored the escalating pressure that his administration faced to get Griner home, particularly after the recent resolution of her criminal case and her subsequent transfer to a penal colony.

The swap was confirmed by US officials with direct knowledge of the negotiations who were not authorised to publicly discuss the deal before a White House announcement and spoke on condition of anonymity.

Biden spoke with Griner on the phone Thursday while her wife, Cherelle, was in the Oval Office. The president was to address reporters later in the morning.

Griner's arrest in February made her the most high-profile American jailed abroad.

Her status as an openly gay Black woman, locked up in a country where authorities have been hostile to the LBGTQ community, infused racial, gender and social dynamics into her legal saga and made each development a matter of international importance.

Griner was arrested at the Moscow's Sheremetyevo Airport in February when customs officials said they found vape canisters with cannabis oil in her luggage.

She pleaded guilty in July, though she still faced trial because admitting guilt in Russia's judicial system does not automatically end a case.

She acknowledged in court that she possessed the canisters, but said she had no criminal intent and said their presence in her luggage was due to hasty packing.