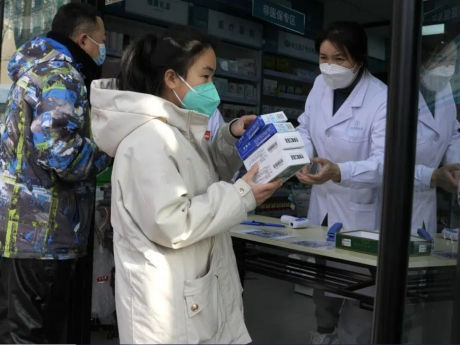 A resident carries away medicine bought at a pharmacy in Beijing, Friday, December 9, 2022. China began implementing a more relaxed version of its strict "zero COVID" policy on Thursday amid steps to restore normal life, but also trepidation over a possible broader outbreak once controls are eased. (AP Photo/Ng Han Guan)

BEIJING (AP) — A rash of COVID-19 cases in schools and businesses were reported Friday in areas across China after the ruling Communist Party loosened anti-virus rules as it tries to reverse a deepening economic slump.

While official data showed a fall in new cases, they no longer cover large parts of the population after the government on Wednesday ended mandatory testing for many people.

That was part of dramatic changes aimed at gradually emerging from “zero COVID” restrictions that have confined millions of people to their homes and sparked protests and demands for President Xi Jinping to resign.

“There's very few people coming in because there's so many cases,” said Gang Xueping, a waitress in a Beijing restaurant. “The country's just opened up. The first one or two months is definitely going to be serious. Nobody's used to this yet.”

In other cities, social media users said coworkers or classmates were ill and some businesses had closed due to a lack of staff. It wasn't clear from those accounts, many of which couldn't be independently confirmed, how far above the official figure the total case numbers might be.

“I'm really speechless. Half of the company's people are out sick, but they still won't let us all stay home,” said a post signed Tunnel Mouth on the popular Sina Weibo platform. The user gave no name and didn't respond to questions sent through the account, which said the user was in Beijing.

The reports echo the experience of the United States, Europe and other countries that have struggled with outbreaks while trying to restore business activity. But they are a jarring change for China, where “zero COVID,” which aims to isolate every case, disrupted daily life and depressed economic activity but kept infection rates low.

Xi's government began to loosen controls November 11 after promising to reduce their cost and disruption.