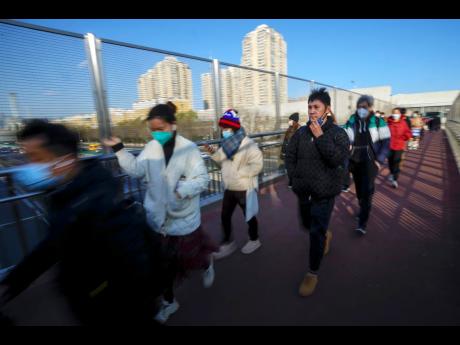 AP
A man smokes as masked commuters walk along a pedestrian bridge in Beijing yesterday. China is the last major country still trying to stamp out transmission of the virus while many nations switch to trying to live with it.

China began implementing a more relaxed version of its strict ‘zero COVID’ policy on Thursday amid steps to restore normal life, but also trepidation over a possible broader outbreak once controls are eased.

The country reported 21,165 new coronavirus cases on Thursday, though it was unclear whether the lower number reflected fewer infections or a reduction in testing.

The National Health Commission issued relaxed anti-pandemic regulations on Wednesday, including a loosening of lockdowns and the elimination of a requirement that a recent negative COVID-19 test be shown to enter most public places.

The commission said it was due to “positive results” in fighting the virus and because of a recognition that the current Omicron variant is less dangerous than earlier versions of the virus – a fact long embraced by other countries that have reopened their societies.

“Our country’s epidemic prevention and control work is facing new situations and new tasks,” commission spokesperson Mi Feng said. Neither Mi nor other experts appearing with him at a briefing Thursday addressed the possibility of a new outbreak once restrictions are eased.

The relaxation also follows street protests – the largest in decades – by people fed up with the draconian controls, which have been blamed for hobbling the economy, upending millions of lives and causing the deaths of some people refused hospital treatment because they lacked proper test results.

“This is an inevitable trend. We must let go sooner or later, and we can’t always stick to previous measures,” said Xin Guijun, a 70-year-old Beijing resident.

“However, one thing is that we are on our own to protect ourselves, and we must cultivate our own awareness of personal protection,” Xin told AP.

While the relaxation sent a wave of relief through Chinese society, much uncertainty remains and the move was not met with universal acclaim.

Dr Anthony Fauci, the top US infectious disease expert and a critic of China’s reliance on lockdowns, said China risked unleashing a new wave of virus mutations on the world if it doesn’t “mount and implement a proactive vaccination campaign”.

“Whenever you have a large wave of transmissions of a virus, you give it ample opportunity to mutate,” Fauci said Wednesday at an event organised by the Financial Times newspaper.

“And when you give a virus opportunity to mutate, that allows it to form potentially new variants. And once you get a brand-new variant, that could have an impact on the rest of the world,” Fauci said.

Fauci and other foreign health officials have urged Beijing to import Western COVID-19 vaccines based on mRNA technology, considered more effective than the inactivated vaccines developed by China. Chinese officials have so far ignored such calls.

The changes announced Wednesday include a renewed commitment to vaccinate vulnerable groups and the elderly, whose levels of immunisation are far lower than the population as a whole. China has administered 3.4 billion doses to its 1.4 billion people, or about 2.4 doses per person, indicating that large numbers have not received the recommended three shots.