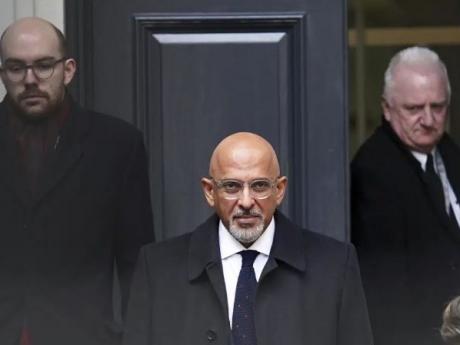 Britain's Conservative Party Chairman Nadhim Zahawi (centre) leaves the Conservative Party head office in Westminster, central London, Monday, January 23, 2023. The chairman of Britain’s governing Conservative Party was under pressure to resign on Monday over allegations he settled a multimillion-dollar unpaid tax bill while he was in charge of the country’s Treasury. (James Manning/PA via AP)

LONDON (AP) — United Kingdom Prime Minister Rishi Sunak opened an investigation Monday into allegations that the chairman of the governing Conservative Party settled a multimillion-dollar unpaid tax bill while he was in charge of the country's Treasury.

It's one of multiple stories about secret loans and unpaid taxes causing discomfort for Sunak, who has faced scrutiny of his own personal wealth and family tax arrangements.

Party chairman Nadhim Zahawi has acknowledged a dispute with tax authorities over shares in YouGov, a polling company he co-founded.

But he said that the error was “careless and not deliberate.”

“So that I could focus on my life as a public servant, I chose to settle the matter and pay what they said was due, which was the right thing to do,” he said in a statement.

The BBC and other British media reported that the tax bill, including a fine, came to almost five million pounds.

They say the bill was settled when Zahawi was Treasury chief between July and September, during the final weeks of former Prime Minister Boris Johnson's tenure.

Sunak said Monday he had asked his standards advisor, Laurie Magnus, “to investigate the matter fully and establish all the facts and provide advice to me on Nadhim Zahawi's compliance with the ministerial code.”

“Integrity and accountability are really important to me and clearly in this case there are questions that need answering,” he said.