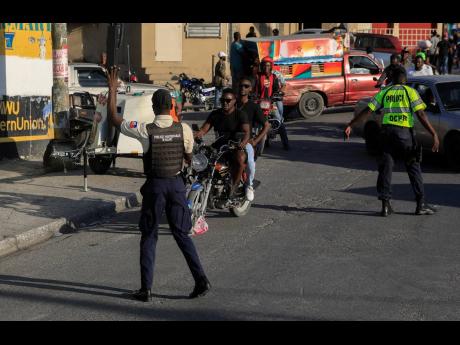 Odelyn Joseph
National police control security on a street in Port-au-Prince, Haiti, on Saturday. One of Haiti’s gangs stormed a key part of the capital, Port-Au-Prince, and battled with police throughout the day, leaving at least three officers dead and another missing.

Every day when Marie Carmel Daniel’s husband put on his flak vest and walked out the door for another day of fighting Haiti’s gangs, she wondered if he would come home that night.

Friday was the day her smiling spouse of 18 years, Ricken Staniclasse, didn’t.

One of the country’s nearly 200 gangs ambushed his police unit that morning, sending gunfire echoing through the streets in an unexpected area — a mansion-lined stretch of the country’s capital, Port-au-Prince.

A gang led by Lionel Lazarre battled the police patrol under the sweltering Caribbean heat as officers desperately called for backup. But help never came, the country’s police union said.

Daniel, meanwhile, was terrified for herself and their three children.

The firefight was just the latest example of how Haitian gangs have grown in power and expanded in reach, leaving much of the population terrorised.

While the United Nations estimates that 60 per cent of Port-Au-Prince is controlled by the gangs, nowadays, most Haitians on the street reckon that that number is closer to 100 per cent.

Haiti has struggled with endemic gang violence for years, but the country spiralled into lawlessness after the 2021 killing of former President Jovenel Moïse.

Powerful gangs have taken advantage of the political chaos and discontent with the current government led by Prime Minister Ariel Henry to further consolidate their control.

The government has failed to ease the violence, forcing many to flee their homes. News of rapes, kidnappings, and ambushes on police have become the new norm.

Jolicoeur Allande Serge, director of the police unit that was attacked, said the Friday blitz in the Petion-Ville neighbourhood was a sign of that. He noted that moving into upper-class areas “benefits (the gangs’) economic interests”.

Kidnappings and ransoms as high as US$1 million have been a key part of the financing for such armed groups.

While Canada and the United States have sent armored vehicles and other supplies to Haiti, law enforcement officials say it is just a fraction of what they really need.

Tensions remained high Saturday, and in the afternoon, Serge stood among a pack of armored trucks dented with bullet strikes. Officers holding automatic weapons, their faces covered by black masks, bustled about.

A group of 50 officers was returning to the area where they fought Friday night to try to break a gang blockade and search for the missing officer, Staniclasse.

“I lost three men ... We’re not scared. We’re frustrated because we don’t have enough equipment to fight,” Serge said as he watched a convoy of police trucks roll out from the station. “We need ammo, helmets, armored vehicles.”

Analysts expect the bloodshed to get worse, especially after Haiti’s final 10 elected officers ended their Senate terms in early January, leaving the parliament and presidency unfilled because the government has failed to hold elections.

Critics say that has turned Haiti into a “ de-facto dictatorship”.

Meanwhile, people like Marie Carmel Daniel feel hope drain for their country. Daniel said her husband always hoped he could help clean up his city. Together, they built a home and a life together. Their 11-year-old son dreamed of following in his father’s footsteps.

“He loved people, he loved to help people,” she said of her husband.

But two years ago, violence began to get so bad in their neighborhood that they applied for a visa to migrate to the United States, hoping to join an exodus of people leaving Haiti. They never got a reply.

“I don’t know if he’s alive or dead, but I’m worried,” she said. “If we were able to leave the country, my husband would be alive.”