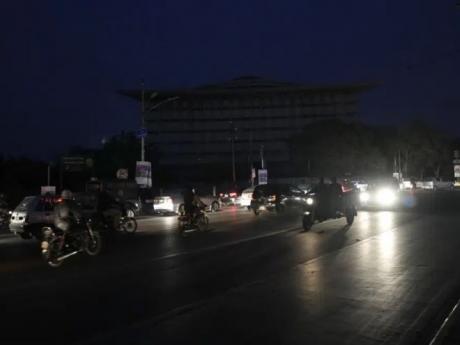 Motorcyclists and cars drive on a road during a national-wide power breakdown, in Lahore, Pakistan, Monday, January 23, 2023. Much of Pakistan were left without power Monday as an energy-saving measure by the government backfired. The outage spread panic and raised questions about the cash-strapped government's handling of the country's economic crisis. (AP Photo/K.M. Chaudary)

ISLAMABAD (AP) — Pakistan's prime minister on Tuesday apologised to the nation for a major, daylong power outage that disrupted normal life across the country and drew criticism from millions who were left without electricity amid the harsh winter weather.

Monday's blackout engulfed schools, factories and shops, and many among Pakistan's 220 million people were without drinking water as pumps powered by electricity also failed to work.

In key businesses and institutions, including main hospitals, military and government facilities, backup generators kicked in.

Power was mostly restored, though some parts of the country still experienced blackouts on Tuesday.

“On behalf of my government, I would like to express my sincere regrets for the inconvenience our citizens suffered due to the power outage yesterday,” tweeted Prime Minister Shahbaz Sharif.

“On my orders, an inquiry is underway to determine reasons for the power failure,” he said adding that the probe will uncover who was responsible.

At a press conference earlier Tuesday, Energy Minister Khurram Dastgir defended the government's handling of the collapse of the grid and lauded engineers and technicians for their efforts to boot up the system.

He made no reference to the fact that an energy-saving measure by the government had backfired.

Authorities had turned off electricity during low-usage hours on Sunday night to conserve fuel, according to an energy-saving plan. Efforts to turn the power back on early on Monday morning led to the system-wide meltdown.