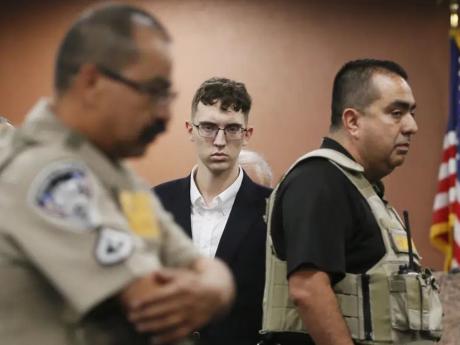 El Paso Walmart shooting suspect Patrick Crusius pleads not guilty during his arraignment on October 10, 2019, in El Paso, Texas. Crusius, who is accused of killing nearly two dozen people in a racist attack at a Texas Walmart, plans to plead guilty to federal charges in the case. (Briana Sanchez / El Paso Times via AP, Pool, File)

EL PASO, Texas (AP) — The man accused of killing nearly two dozen people in a racist attack at an El Paso Walmart plans to plead guilty to federal charges in the case, according to court records filed days after the federal government said it wouldn't seek the death penalty in the case.

Patrick Crusius is still charged in state court with capital murder and could still face the death penalty in Texas if convicted in the 2019 mass shooting that killed 23 people.

In a court filing Saturday, defence attorneys asked for a hearing to be set so Crusius could plead guilty to federal charges.

He was charged with federal hate crimes and firearms violations.

US District Judge David Guaderrama, in an order Monday, set the hearing for Feb. 8 in El Paso.

Crusius surrendered to police after the attack, saying, “I'm the shooter, ” and that he was targeting Mexicans, according to an arrest warrant. Prosecutors have said he published a screed online shortly before the shooting that said it was “in response to the Hispanic invasion of Texas.”

The August 3, 2019, shooting happened on a busy weekend day at a Walmart that is typically popular with shoppers from Mexico and the US.

In addition to those who died, more than two dozen were injured. Many were citizens of Mexico.