Rights groups dismayed at lack of criticism for abuses 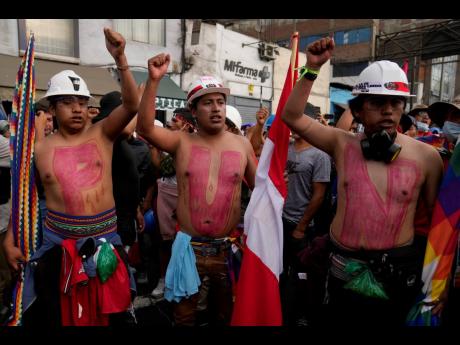 Martin Mejia
Anti-government demonstrators march in Lima, Peru, on January 20. Protesters are seeking immediate elections, the resignation of President Dina Boluarte, the release from prison of ousted President Pedro Castillo and justice for demonstrators killed in clashes with police.

In less than two months, more than 50 people have died in Peru, largely protesters at the hands of police officers. And while a few international voices of concern have emerged, much of the regional and global community has largely remained silent.

The silence comes at the dismay of human rights groups who are calling for more condemnation of the state violence after then-President Pedro Castillo was impeached and imprisoned for trying to dissolve Congress.

“The feeling is we’re alone,” said Jennie Dador, executive secretary of Peru’s National Human Rights Coordinator, a civil society group. “None of the states in the region have done anything concrete.”

As regional leaders gather in Argentina’s capital on Tuesday for a meeting of the Community of Latin American and Caribbean States, there were signs that, at least for now, some leaders appear to prefer to leave the issue aside.

But not all. Chile’s President Gabriel Boric said there was “an urgent need for a change in Peru because the result of the path of violence and repression is unacceptable.” Mexico’s president, Andrés Manuel López Obrador, a staunch supporter of Castillo, gave a recorded message in which he demanded an “end to the repression” in Peru.

The two regional leaders spoke shortly after President Alberto Fernández of Argentina did not mention Peru in the opening of the regional summit.

That dynamic illustrates how although Peru’s repression of protests has received some global attention, activists say it is far less than what they would expect considering 56 people have died since Dina Boluarte, the former vice president, was sworn in as president on December 7. Of that total, 45 have been in direct clashes with security forces, according to Peru’s ombudsman.

“The international community has expressed concern, but really I think it could be more forceful,” César Muñoz, associate director of the Americas division at Human Rights Watch, said. A key thing other governments in the region could do, Muñoz added, is emphasise “that the rule of law means there must be independent investigations of all the deaths”.

Latin American leaders are meeting on a day when yet another large protest is expected in Peru’s capital, the latest in a series of street demonstrations that began last week when thousands, many from remote Andean regions, descended on Lima for mobilisations to demand Boluarte’s resignation, immediate elections and the dissolution of Congress.