US gynaecologist who molested patients convicted of federal sex crimes 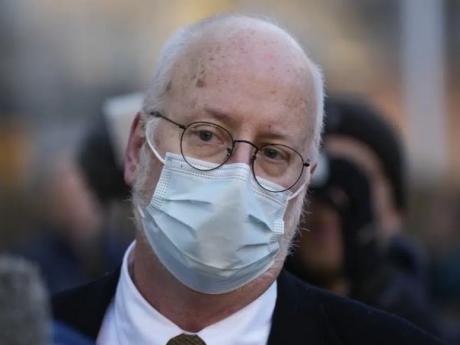 Robert Hadden leaves the federal courthouse in New York, Tuesday, January 24, 2023. Hadden, a gynaecologist who molested patients during a decadeslong career, was convicted of federal sex trafficking charges Tuesday after nine former patients told a New York jury how the doctor they once trusted attacked them sexually when they were most vulnerable. (AP Photo/Seth Wenig)

NEW YORK (AP) — A gynaecologist accused of molesting hundreds of patients during a decadeslong career was convicted of federal sex crime charges Tuesday in a victory for accusers who were outraged when an initial state prosecution resulted in no jail time.

Robert Hadden, 64, of Englewood, New Jersey, was convicted after less than a day of deliberations at a two-week trial in which nine former patients described how he abused them sexually during examinations when they were most vulnerable.

Outside the courthouse after the verdict, women who were among Hadden's victims expressed relief at his conviction and said they were eager to see him start serving time.

“This is such a victory for all of us,” said Evelyn Yang, whose husband, Andrew Yang, ran unsuccessfully as a Democrat for president in 2020 and for New York City mayor in 2022.

She said Hadden sexually assaulted her years ago when she was seven months pregnant.

“It's also validating. The jury came back with their verdict so quickly. And he was found guilty on all counts. That just, I think, leaves no doubt in anyone's mind that he was a serial predator who deserves to be imprisoned,” she said.

Hadden, who is subject to electronic monitoring and was free on $1 million bail, declined to comment as he left the courthouse.

He may not be free for long. Judge Richard M. Berman declined a request by a prosecutor and 10 victims that Hadden be immediately jailed but set a hearing next week to further consider the matter.

Sentencing was set for April 25.