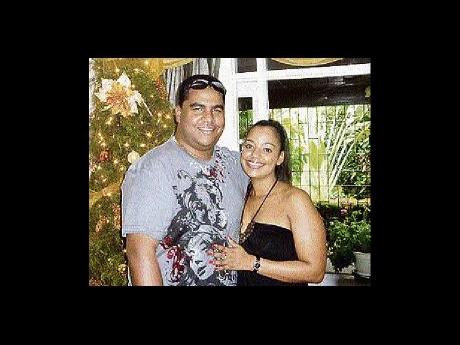 Businessman and printer Roger Brown and his long-time girlfriend, the beautiful Shawna Newman, got engaged on Christmas Day! - Contributed

Pardon the pun, but full-figured women have long been the proverbial elephant in the room. They have been ignored by fashion designers, scribes and stylists, when it comes to fashion's international symbol of success, the runway!

They have also been ignored by other areas of the fashion industry. They are sometimes ridiculed by the ignorant and prejudiced who, in their own smug, but jaundiced perspective of what is fashionable, view the fuller-figure woman as little more than someone to be tolerated, but never taken seriously.

Skinny women might have been the dominant face of fashion for decades, but oh the times are a-changing! And with those changes, full-figured women are once again emerging as more than just fashion addenda, whose merchandise, if and when carried, is to be found in the less-fashionable sections of department stores. They have now moved to front and centre of the fashion world!

It's the quiet revolution. Full-figured girls have not only been gaining traction in the marketplace, but also in the hallowed halls of fashion. So much so, that major international modelling agencies have now created a full-figure department. So it is with Pulse, blazing the way with the launch of its full-figured woman reality TV series.

Pulse is not the only organisation tapping into this new reserve. Two Sundays ago, former runway model, now owner/operator of the Bling-Bling stores, Sharon Beckford, signalled her own foray into the new modelling industry with a spectacular launch at her headquarters at Mid-Springs Shopping Centre, Constant Spring Road. Under the banner of GlamourPlus International, she launched her plus-size agency, totally and wholly dedicated to full-figured models.

Dubbed Jamaica's first plus-size modelling agency, at the launch there was no mistaking the target audience. To open the evening, the affair began with cocktails and finger foods before segueing into a fashion show that was easily one of the hottest fashion presentations ever attempted in the nation's capital! The event was hosted by television personality and actress, Dahlia Harris. The models made several appearances, dished out verve and fabulousness like they were to the manor born! We are talking pizzazz here, as in diva-style attitude designed to arrest attention!

The event was all that it promised and more, as we are talking a thoroughly entertaining presentation, never losing sight of its professionalism and ground-breaking nature! The models were well outfitted and proved equal to the task of representing the plus-size woman, at every end of the social spectrum, not in a token mode, but as the real McCoy. The beauty of it all was that models on display were taking to the stage for the very first time as professional hopefuls, trained to be marketed by GlamourPlus International, to national advertising and casting agents, as well as to the international marketplace! These are the aims and objectives that the participating models - Andrea Fyffe, Yanike Shuriah, Kathy-Lee Hastings, Donya Thomas, Shannay Ferguson, Carmen Lynch, Nicole Pryce, Tanya Spence, Myesha Thomas and Kimberly Bramwell - will not only identify, but hope will be realised!

Then birthday wishes to the fabulously talented Olympian Melaine Walker, who celebrates her birthday today, January 1. Amelia 'Milk' Sewell celebrates her birthday on Saturday, January 2, as will: Wayne Wright, in north Atlanta, Georgia; Randolph Scott, formerly of Ocho Rios, now in Berkeley, California; and Kadian Martin, 'Niko Suave' to friends and fans, who will be celebrating in South Carolina. The fabulous Nicky Goldberg will be celebrating her special day on Sunday, in Tel Aviv, Israel; as will Raynard 'Ray-Ray' Kerr, formerly of Hedonism II, in Negril, now in Washington, D.C.; party high priest Adrien Lemaire, in Kingston; and Phillipa McLaren, in Mandeville.

Dr Marjorie Vassel celebrates her birthday on Monday, January 4, along with George Linton-Salmon, in London, England; and Che Ingleton, in Florida. On Tuesday, celebrated playwright Aston Cooke will be blowing the candles out on his cake with family and friends. Soprano, the lovely Dawn Fuller-Phillips also celebrates on the 5th with the lovely Kai Wakeling. the fabulously exciting Louise Finnegan, will celebrate in Panama; and Horace Bather, formerly of Linstead, St Catherine, will be celebrating in New York City.

Michael Lyn will celebrate on Wednesday at home in Florida, with wife, Denise, promising a family affair only with parents Michael and Thalia Lyn expected to join the family for the do. Plus RJR's Derrick Wilks celebrates on the 7th. And belated birthday greetings to the lovely Lisa Marzouca, who celebrated her special day on the 27th. Happy birthday, y'all, with champagne toasts and beluga treats!

And more champagne toasts to the fab couple Roger Brown and his long-time belle, the beautiful Shawna Newman, who got engaged on Christmas Day! No date yet for the nuptials, but friends and family are over the moon with the announcement, and expect the couple to walk down the aisle sometime in 2010, with some saying the celebrations will continue until then!

Happy holidays, y'all, and here's to a brand new decade and all its possibilities!