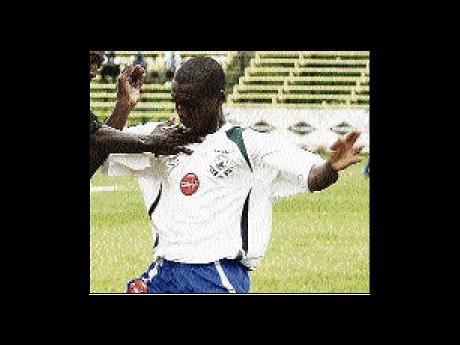 The Vineyard Town-based club have been found guilty of using an ineligible player in their December 12 clash against top-three rivals Rae Town by the competitions committee of the Kingston and St. Andrew Football Association (KSAFA), which met on November 24, December 15 and 29 to consider the issue.

The match, played at Breezy Castle, ended with Santos winning 3-0 with their leading forward and captain Fabian Nethersole netting all three goals.

However, Dwayne Atkinson, who was shown a red card in his team's December 9 Claro Jackie Bell Confederation KO match against Greenwich Town, was not eligible for the match.

Santos suffered a 1-0 defeat in the Jackie Bell match and hence dropped out of the competition. Atkinson should have missed Santos' next official game, which was the Super League meeting with Rae Town. The December 12 match was thus awarded to Rae Town by a 3-0 scoreline and Santos docked three points.

The ruling has not changed Santos' position in the standings as they remain in third but have fallen from 28 to 25 points. Rae Town are now sole leaders of the 12-team table as they move to 31 points, three more than second-place Cavalier.

The ruling was handed down based on Article 39.2 of the Jamaica Football Federation Disciplinary Code. It states that match suspensions in relation to an expulsion pronounced on a player outside of a competition (separate match[es]) or not served during the competition for which they were intended (elimination for the last match in the competition) are carried over to the next match the player is eligible for in another competition or the next match of the same competition in the following season, whichever comes first.

Maverley/Hughenden were also found guilty of using an ineligible player in their December 5 meeting with Meadhaven United. Maverley/ Hughenden's Chris Dalkins had received yellow cards on October 7, November 14 and 28 and therefore should have missed the game against Meadhaven. Meadhaven had won the game 6-0, a scoreline which has been adjusted to 9-0. Maverley has also been slapped with a $5, 000 fine.

Major League outfit Rockfort have also found themselves on the receiving end of a $5,000 fine following a field invasion by their supporters during their November 14 game against Central Kingston. The 86th-minute invasion was prompted by the issuance of three red cards to players of the Rockfort team. The match has been awarded to Central Kingston by a 3-0 score margin.

The Rockfort playing field has also been banned for the remainder of the 2009/2010 Claro Major League season. Rockfort have been requested to identify and inform the KSAFA secretariat of an alternative venue to host its remaining home games.