Sky is the limit for Under-20 Reggae Girl 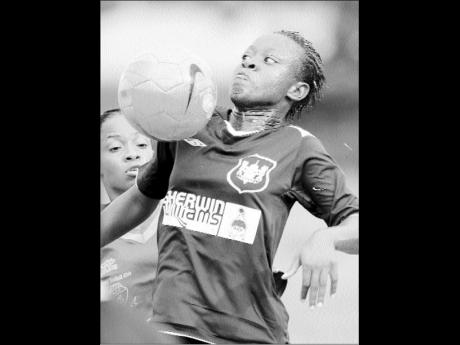 File
Honeyghan in action for Reno against Santos in the Sherwin Williams Women's League.

When Jamaica's Under-20 female footballers take the field in their opening Group B game against the United States in the final round of the CONCACAF World Cup qualifiers in Guatemala City on January 20, a lot will be expected of striker Simone Honeyghan.

The junior Reggae Girlz will face Mexico in the second game on January 23 and two days later, they will battle Caribbean rivals Trinidad and Tobago (T&T).

The 19-year-old, Honeyghan has so far scored six goals for the national team, which includes goals against Trinidad and Tobago and St Kitts and Nevis in the second round of the qualifiers last month.

"I feel a bit pressured because this is going to be a big tournament for us," said the soft-spoken Honeyghan.

"But I know that I have the talent and the skills to do it for my country and I know that my teammates believe in me and they will also be depending on me to score the goals for the team," she said.

However, despite the pressure and the high expectations that have been placed on her by the coaching staff and her teammates, Honeyghan noted that she has been working very hard to improve her game.

"I think that once I stay on my feet and stop falling down easily, I will be able to score a lot of goals in this tournament," said Honeyghan with a smile.

The diminutive striker, who describes herself as a humble and kind person, suffered a minor head injury two weeks ago during training and has since been ordered by her doctors to take it easy in practice.

But, despite the setback, Honeyghan said she would be ready in time for the tournament.

"I will definitely be ready before the tournament begins because the doctors said so and my recovery process is going well," said Honeyghan, who represents Reno in the Sherwin Williams Premier League.

Honeyghan led defending champions Lennon High to their second consecutive hold on the ISSA football championship and in the process scoring a total of 48 goals. She was also voted the Most Valuable Player of the championships.

Vin Blaine, head coach of the young Reggae Girlz, describes Honeyghan as a good player who could be relied upon up front. "Simone is a gutsy player and a lot will be expected of her during this tournament," Blaine said.

A native of Clarendon, Honeyghan has been playing football for the past ten years. She began her career at the Race Course Primary School, which she also represented in the All-Island Primary Schools Championships.

Honeyghan reasoned that the sky is the limit for her and she hopes to become a professional footballer in the future. "I am going to work very hard to achieve this because I believe I have what it takes to make it at the highest level," she said.