Chief to rule in ninth race 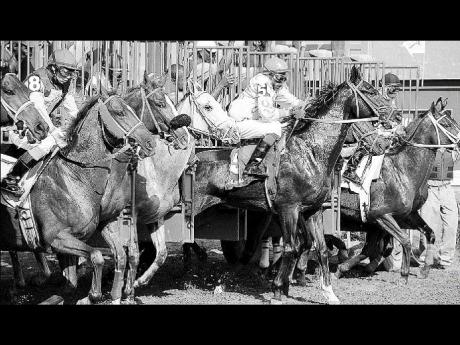 Ian Allen/Photographer
The horses break from the gates at the start of the seventh race on December 26, Boxing Day, at Caymanas Park. The race was won by 17-1 shot Running Loose, ridden by apprentice Conrad Ellis.

Unlike yesterday's card which featured three trophy races, none is being offered today.

As a result, the 3-y-o and up overnight allowance ninth race over 1200 metres moves into the spotlight as the day's feature.

Meanwhile, the popular Track Price Plus Dig-Out Handicap marks its first race for 2010 with 11 declared for the closing $250,000-$210,000 claiming race over the straight five course. This promises keen competition with the likes of down-in-class NASATOL, COCK ROBIN, RUSSIAN MARQUE and the course specialists JET SKI D'OR and DIESEL expected to fight it out.

The nine-year-old grey gelding NASATOL, though getting on in years, bids for his 22nd career win and now dropped in class after running an improved race (fourth) behind COLEMAN'S ROCK over 1200 metres on December 19, gets the nod over COCK ROBIN.

Despite having more to do, the Joseph Thomas-trained COLEMAN'S ROCK cannot be underestimated with 50.0kg and competent 4.0kg claiming apprentice Aaron Chatrie aboard. The four-year-old son of Law Of The Sea-Tech All won both races quite easily in fast times and will not be adversely affected by the change of pace and should give a good account of himself.

However, he will more than likely have to produce a career best effort in order to upstage the top two - THE CHIEF and RIVER STYX.

Trained by Richard Azan, THE CHIEF failed to justify 4-5 favouritism at the December 13 Sunday meet when beaten into second place by MINISTEROF-JUSTICE in a fast-run (59.1) round-five race.

The form of that race is working out in that the third horse, NATURALLY ROYAL, came back to beat a good field of overnight allowance over 1100 metres on Boxing Day. Among his victims was RIVER STYX, who recovered from a sluggish start to finish 6 1/2 fifth.

THE CHIEF reports in good nick and now better drawn on the outside of this large field will prove hard to deny with only 52.0kg and in-form Panamanian Dick Cardenas aboard.

Indeed, THE CHIEF will only need to reproduce his good effort in the November 14 ADL Tetley Caribbean Sprint Championship when finishing 6 1/2 fourth to champion sprinter AHWHOFAH over the distance to topple this field.

I also like SONOR to win the fourth race; BROTHERLY LOVE over SIR JAADA BABA in the fifth; THE GUV in the seventh; and SOCA PART to catch HERA and KISSING CHRISSY in the eighth.