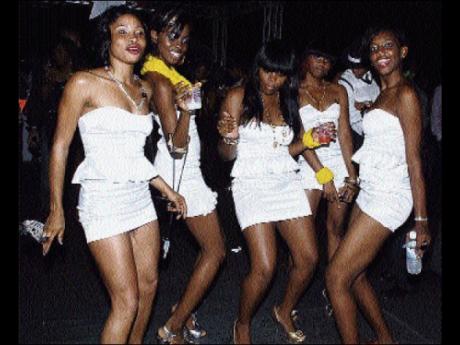 These patrons, all dressed in white, were definitely having a good time at Smirnoff Xclusive, held at Innswood Heights, Stony Hill, St Andrew on Thursday night.
- Colin Hamilton/Freelance Photographer

A man juggling fire sticks on stilts, clappers and a live video feed of the New Year's celebrations in New York City, broadcast on several flat screens, were the main features that signalled the start of 2010 at Smirnoff Xclusive held at Innswood Heights, Stony Hill, St Andrew, on Thursday night.

The party themed 'One Night in Ibiza', had the perfect backdrop of city and truly delivered on the 'sitting on top of the world' feeling, coupled with great food and vibes. Flashing lights attached to nicely-decorated tables around the venue, flat screens flashing "Ibiza" and greetings from sponsors, a photo booth and party hats for patrons, all helped to create the awesome vibe advertised.

However, the fun at the party dipped following the firing of a few shots that saw some patrons leaving early.

Renaissance's DJ Smoke was on the turntables at 3:30 a.m. when three gunshots rang out, apparently fired into the in the air by a patron. The sound, which echoed from a section of the dance floor, caused some patrons to scamper for cover. The security officers rushed in quickly to restore order and although they did not nab the culprit, they were able to get enough information to identify the person.

Phillip Palmer, one of the promoters of the event told The Gleaner that the police was handling the situation and the guilty person would be dealt with according to the law.

Prior to the incident, the event was rocking with hits spun by FAME's Collin Hines, who got patrons in a wining mood with his hip-hop, dancehall and soca selections. Next up was DJ Shane who changed the tempo of the party with remixes of popular tunes such as Black Eyed Peas' Boom Boom Pow and others.

Black Eyed Peas' I Got a Feeling took the vibes even higher as patrons jumped in the air and a real rave vibe was created in the venue. DJ Smoke then took over the turntables and even after the shots were fired during his set, he started to rebuild the energy with some dancehall selections such as Summer Swing, Brighter Day, GoGo Club and others.

Those patrons who stayed continued to dance and party, cleaarly enjoying selections of Nuh Fren Fish, Hope and Pray, Bend Over among others. Collin Hines then retook the turntables and kept the party going until well after 4 a.m. when most patrons started heading down the hill to get on the shuttle buses, which took them back to the heart of the city.