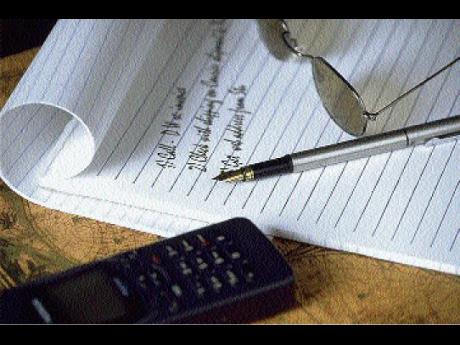 It's that time of the year again. With conviction in our hearts, we grab pen and paper and begin making new year's resolutions. For most of us, the list may seem familiar because we find ourselves going at them over and over again, year after year. That is the case for Alethia Lambert. "Of course, there is the 'go to the gym, run, walk, anything ... keep in shape' resolution that is always on the list. I give myself a toast for effort, the heart was willing but ... you know the rest!

Some persons forget their resolutions a few months in and don't return to their list, like Elizabeth Salmon. "To be honest, the only two resolutions that I remember were one, to be more patient and I think I succeeded, and two, to save. This, I failed miserably at because there just wasn't enough money to go around. This time I will pay myself first."

Lanville Henry's 2009 resolution was to stop drinking. "My new year's resolution was to stop drinking alcohol. I tried, but it was difficult to achieve being the social butterfly that I am and compounded by the numerous temptations posed by the myriad of alcohol-consuming friends I have. I need to reinstate this resolution for 2010 for the sake of my health, church and finances. It also means that I might have to drop some of my present company."

Like Henry, Kella has put some things she started in 2009 on the agenda again. "It was to go back to school in 2009. I finally did in August, making things much more difficult than they already were, financially. I kept it for four months. I can't see how it'll go over into 2010 at this juncture. For 2010, because of the high level of unpredictability and vulnerability to harsh realities, there has to be something feasible and realistic to improve living, livelihood and the prospect of a bright future. I will endeavour to be self-sufficient and start my own business and determine my future."

It might be a good idea to remain optimistic like Damion Johnson. "I achieved some of the resolutions I made for 2009, but not all of them. I haven't completed my list for 2010, but so far, the list is looking good. I want to party less and stay home more which I hope will help me get into a stable relationship. I want to start going back to church. I also have some educational goals on the list, so it will be a busy 2010 for me. In 2009, I was very busy pursuing my business goals, so the personal ones, such as exercising more, got left behind. I've been going to the gym lately though, so it didn't turn out too badly."

One of the main reasons persons don't achieve their resolutions is procrastination and that is what happened to Gaye Kumar. "Some (of my resolutions) keep going back on the list. Saving an allotted amount is a major one. One main reason why I don't achieve them is because I procrastinate. At the end of the year, I am back to being flat broke and just waiting on that bonus."

Here are some tips to help you achieving all the resolutions on your list.

Think carefully about the things that are attainable. You might want to concentrate on those that will have the greatest impact on your happiness, health and fulfilment. For example, giving up smoking will obviously improve your health, but it will also give you a sense of pride and make you happy.

Keep your resolutions simple. Sometimes people find themselves aiming for an overhaul of their entire lifestyle, and this is simply a recipe for disappointment and guilt. It may be understandable at this time of year, when self-improvement is on your mind, but experience shows these things can't all be achieved at once. The best approach is to focus clearly on one or two of your most important goals.

Create bite-sized portions. Break goals down into manageable chunks. This is, perhaps, the most essential ingredient for success, as the more planning you do now, the more likely you are to get there in the end. The planning process is when you build up that all-important willpower which you will, undoubtedly, need to fall back on along the way.

Set clear, realistic goals, such as losing five pounds, saving $2000 a month, or going for a run once a week. Decide exactly how you will make this happen.

In fact, the time-frame is vital for motivation. It is your barometer for success, the way you assess your short-term progress towards the ultimate long-term goal. Buy a calendar or diary so you can plan your actions for the coming weeks or months and decide when and how often to evaluate.

The surest way to fall short of your goal is to make your goal unattainable. For instance, resolving to never eat your favourite food again because it is not healthy, could be a bad choice. Strive for a goal that is attainable, such as avoiding it more often than you do now.

(6) Have a support group

Persons tend to keep their resolutions secret. It's harder to go it on your own. Talk about it, tell friends and family members who will be there to support your resolve to change yourself for the better or improve your health. The best case scenario is to find yourself a buddy who shares your new year's resolution and motivate each other.

If your resolution has totally run out of steam by mid-February, don't despair. Start over again! There's no reason you can't make a "new year's resolution" any time of year. If, by February, you find yourself in your old ways, don't throw your hands up in defeat. Try again.