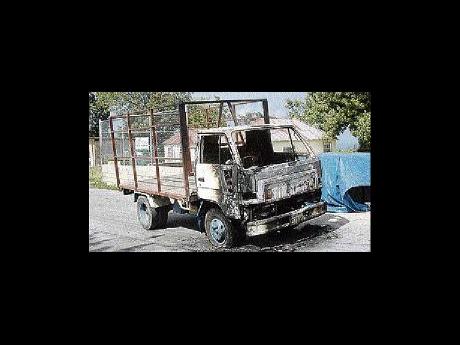 The burnt remains of a truck that was destroyed in an attack by gunmen in Salt Spring, St James, last week. - Photo by Adrian Frater

TWO MEN who pledged to serve, protect and reassure have been listed by the police as suspects in the murder of two people and the torching of six houses in Salt Spring, St James.

Constable Richie Martin, who is currently on suspension from the Jamaica Constabulary Force (JCF), and ex-police constable Omar Gordon have been named, alongside seven others, by investigators.

Yesterday evening, Martin turned himself in. Gordon had still not yet been located.

Also named are André Pinnock, as well as six other men known only by their aliases. They are: 'Dutch'; 'Winter Fresh'; 'Jerome', also known as 'Hico'; 'Dave'; 'Pop Corn' and 'Corn Flakes' - all of whom frequent Delacre Park and Tivoli Gardens in Kingston.

Assistant Commissioner of Police Denver Frater told The Gleaner that the men are all believed to be members of the notorious Stone Crusher gang which operates out of the western end of the island.

"We have assembled a special team of experienced investigators to conduct investigations in this matter and they are being supported with all the resources available to track and find all the suspects. We believe they are armed and have the potential to create problems in the Salt Spring community," Frater said.

The senior crime fighter has urged residents not to harbour the wrongdoers.

"I am personally assuring them that any information they relay to us will be treated in the strictest of confidence," Frater added.

Approximately 2 a.m. last Wednesday, persons were at a birthnight party at McGhee Top when gunmen invaded, fired indiscriminately, and burnt six houses and a truck, which had transported a sound system.

Cecilia Sawyers-Coke, 38, of Salt Spring was later found dead with more than 30 bullet wounds to her body.