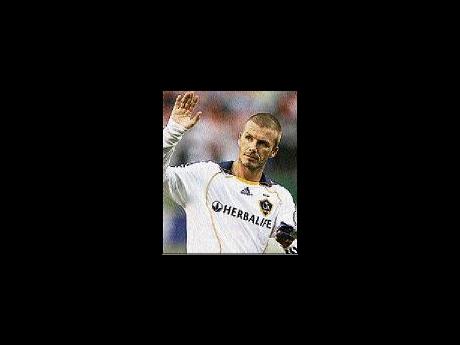 David Beckham says he wishes he had emulated Ryan Giggs and stayed at Manchester United his entire career.

The Los Angeles Galaxy midfield star, who initially left United for Real Madrid and is now on loan at AC Milan, told BBC Radio yesterday he never wanted to leave the English club in 2003.

United sold Beckham to Real Madrid after his relations soured with manager Alex Ferguson, who was concerned about his off-field commercial exploits. Giggs, who is now age 36, has been at Old Trafford since making his debut as a 17-year-old, the same as Beckham.

"I'd have loved to have stayed at Manchester United for my whole career and never gone anywhere else but it just wasn't meant to be," Beckham said.

Needs to play in Europe

Although he helped Galaxy reach the MLS Cup final, Beckham admits he needs to be playing regularly in Europe to stand a better chance of convincing England coach Fabio Capello he deserves to go to the 2010 World Cup, his fourth.

"I know I have to play quite a lot for AC Milan. I'm prepared to do that," said Beckham, who is England's most capped outfield player with 115 appearances. "Everybody knows I'm prepared to work hard to be part of the England squad.

"I've always been very positive and I've always said I want to be available for England whether I'm in the team or not. I'm passionate about playing for my country and I always want to be a part of the England squad."