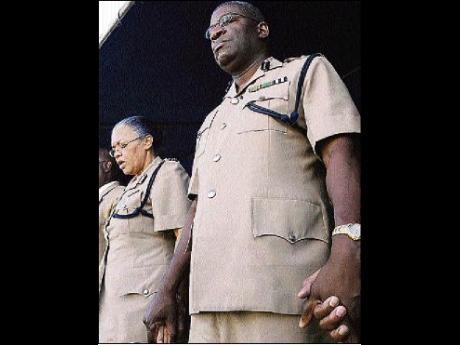 Acting Commissioner of Police Owen Ellington yesterday revealed that the nation only just missed the highest number of murders in a year.

In addressing the Jamaica Constabulary Force (JCF) at its annual devotion held at the commissioner's office, Ellington, who is tipped to become the new commissioner, said the force was determined to reduce last year's number.

"We came very dangerously close to exceeding that painful target of 1,674 murders, which was set back in 2005. Even though we are not announcing today, this year we are determined to begin the job of turning around the situation," he said. He said reduction targets would be announced later this week.

Ellington has described the situation ahead of him as challenging, and with just a week into the year, he already seems right.

After just five days into 2010, the murder tally has already hit double figures.

"Last year was a particularly bad year for the citizens of Jamaica because of the extent to which criminal activities shattered the lives of many and degraded the quality of life of a significant number.

"This year promises to be very challenging and it promises a lot of uncertainties as well, I think the best approach for us in law enforcement is to proceed on the basis that we are guided by the Almighty and that is why this meeting is so important this morning," he said.

Ellington said one of his targets would be to communicate to the citizenry of the island that organised crime came with a heavy price.

He said the JCF was also trying to break the back of the "hustling" culture - where individuals engage and turn a blind eye to drug running and other illegal activities - because it puts everyone in danger.

The acting commissioner asked Jamaicans to work together to solve crime.

"My appeal to all Jamaicans is that you support us, be patient with us, be understanding. We have to work very hard at expanding partnerships right across Jamaica."

Last year was a particularly bad year for the citizens of Jamaica because of the extent to which criminal activities shattered the lives of many and degraded the quality of life of a significant number. -Ellington