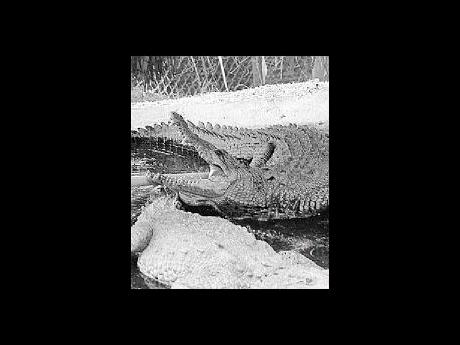 Crocodiles at the zoo. - file

I refer to the letter by Lloyd Walters, published in The Gleaner on January 1, entitled 'Time for crocodile cull'.

Unfortunately, some members of our society still believe it is OK to kill crocodiles. The crocodile is a protected species under the Wildlife Protection Act, and persons found guilty of killing or capturing the animals can be fined $100,000 or sentenced to up to a year in jail.

The status of our crocodile population is not easy to assess but indications - based on scientific evidence from the University of the West Indies and National Environ-ment and Planning Agency - are that the species is declining, rather than growing, in numbers. Reasons for this are continued killing and conversion of crocodile habitats into development areas (housing, hotels, etc.), the latter destroying nesting areas.

Recent evidence of this are two crocodile skins hanging in a tree in somebody's yard on Parottee Road, outside Black River, and a dead croc, with a bashed-in skull, on the Long Bay beach in Manchester (Canoe Valley). Crocodiles get shot regularly at Parottee. At the same time, the wetlands on the opposite side of the road are filled in with marl for roadside shops, bars and hotels, slowly destroying this incredibly rich ecosystem which is also an important bird area.

Last Saturday morning, a large croc of at least 10 feet came up on what is left of the Old Wharf beach in Treasure Beach, passed the Bicknell sea wall, climbed over the sand dune and went through the bulldozed building sites down into the Great Pedro Pond. This is normal crocodile movement which can be observed all along the south coast, something with which most local people in Treasure Beach have no problem.

The problem is that we move into crocodile areas with our housing schemes and hotels and, since crocodiles are territorial, they tend to stay there. The solution is to share the land, leave the ponds intact and keep corridors open between the beaches and the ponds. Crocodiles do not usually attack people, as long as they don't interfere with them, nor goats or any other domestic animals. I have seen goats grazing a few feet from basking crocs in Treasure Beach, and puppies playing mock attack games with crocs on the Parottee beach to the amusement of our children and foreign visitors. Crocodiles feed on fish (preferably sick or dead), shore birds, the occasional slider turtle, and whatever dead gets thrown into the water. They keep ponds and rivers clean.