Jamaican-born Muslim cleric to be deported 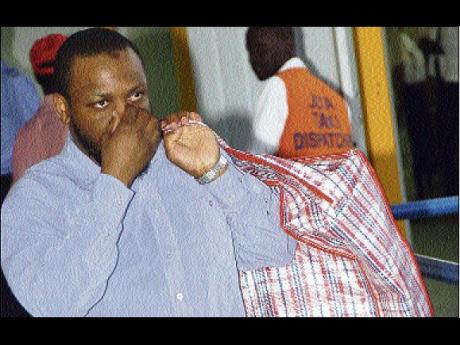 Jamaican-born Muslim cleric Abdullah el-Faisal at the Norman Manley International Airport in Kingston in May 2007 after being deported from the United Kingdom. - Norman Grindley/Deputy Chief Photographer

THE KENYAN authorities were reported yesterday to be planning to deport Jamaican-born Muslim cleric, Abdullah el-Faisal, who may have helped inspire the Nigerian man accused of trying to bomb an American airliner headed to Detroit on Christmas Day.

According to a report published in the New York Times yesterday, Faisal has long been known to law-enforcement agencies in the United States and Europe.

He was tried in Britain in 2003 on charges of spreading racial hatred and urging his followers to kill Christians, Hindus, Jews and Americans. He was deported from Britain in 2007.

Reuters reported from the Kenyan capital Nairobi that Faisal was in the country on a preaching tour. But intelligence officials feared his speeches would encourage radicalism in a country that has been a target of attacks ascribed to Al-Qaeda, including the 1998 bombing of the American Embassy in Nairobi. He was arrested in the port city of Mombasa on Sunday.

"The minister in charge of immigration has declared him as an unwanted immigrant. We don't want him in this country," a police spokesman, Eric Kiraithe, told Reuters. It was not clear when Faisal would be deported.

"From what he says, he was coming to preach," Kiraithe said. "The contacts he was maintaining, according to our intelligence, are not the best; are not in our national interests."

Faisal settled in Britain in the early 1990s and became imam of the Brixton mosque in South London, which was reported to have been frequented by Richard C. Reid, the so-called shoe bomber who sought to blow up an airliner bound for the United States just before Christmas in 2001.

Abdul Haqq Bakr, the chairman of Brixton Mosque and Islamic Cultural Center, said at the time that Reid had joined prayers at the mosque in late 1995 and left in 1998.

Faisal, a Jamaican-born convert to Islam who studied in Saudi Arabia, was found guilty in 2003 of encouraging followers to use chemical and nuclear weapons against their enemies from other faiths. He was sentenced to seven years in prison.

He was deported four years later after the authorities accused him of influencing Germaine Lindsay, one of the four attackers in the London bombings of July 2005.

Faisal's name surfaced much more recently in investigations into Umar Farouk Abdulmutallab, the Nigerian man accused of the attempted attack on Northwest Airlines.

In an online posting in May 2005, under the name 'farouk1986', Abdulmutallab referred to Faisal as a cleric he had listened to, according to American military and law-enforcement authorities.

In his posting, Abdulmutallab wrote: "I thought once they are arrested, no one hears about them for life and the keys to their prison wards are thrown away. That's what I heard Sheik Faisal of UK say (he has also been arrested I heard)."

It was not clear how Faisal had made his way to Africa after being deported to Jamaica in 2007. The Daily Nation newspaper quoted the immigration minister, Otieno Kajwang, as saying he entered Kenya from Tanzania using a border post at Lunga Lunga that was not connected to a central database in Nairobi.

The Daily Nation newspaper reported Sunday that Faisal had previously been denied entry into Kenya.

He had travelled to Nigeria, Angola, Mozambique, Swaziland, Malawi and Tanzania before arriving in Kenya, the newspaper said. He was arrested after attending prayers at a mosque.

The newspaper quoted Kajwang as saying: "I have already signed his deportation letter and he will be deported back to his country at the earliest opportunity.

"We are deporting him because of his terrorist history and the fact that he is on the international watch list. We have no charges against him, but he took advantage of the situation at Lunga Lunga border to enter the country. He deliberately entered by road at a border point not linked to our computer system," the minister said.