'We have enough depth' 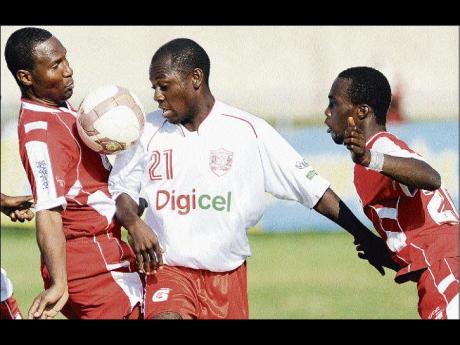 Boys' Town's Peter Keyes (centre) battles to win possession of the ball in the midst of August Town's Aphas Bernard (right) and Kevin Henziel, during the Digicel Premier League football match at the UWI Bowl on Sunday. Keyes scored for Boys' Town, as the match ended 1-1. - Ricardo Makyn/Staff Photographer

While a number of teams will be looking at the idea of bringing in new players during the January transfer window for the Digicel Premier League, at least one team, Waterhouse Football Club, will not be looking that way.

According to head coach Geoffery Maxwell, Waterhouse are playing good football at the moment and with him having a number of talented players at his disposal, he does not see the need to go in search of any other player.

"We won't be taking on any players as we believe we have enough depth to take us to the title," said Maxwell, after his team's come-from-behind 3-1 win over mid-table Sporting Central Academy on Sunday at Waterhouse Mini Stadium.

"Also, we have a good under-21 programme and if and when the need arises, we will pull from it. So right now, there is no need to go outside," Maxwell added.

Waterhouse were led to victory on goals from long-serving striker Kevin Lamey in the 45th and 80th minutes, and substitute Jonathan Williams in the 91st, which erased a 37th minute strike from Sporting Central's Damarley Samuels.

The win moved Waterhouse into third position overall on 36 points, the same as second-place Tivoli Gardens, the defending champions, who have better goal difference. Harbour View, on 39 points, lead the overall standings.

But it is Waterhouse's rich form that has had everybody talking and Maxwell smiling. Waterhouse, in defeating Sporting Central, improved their record in the round to 7-2-0 and with two rounds of matches to go, they need just one point to secure a place in the second End-of-Round final.

Boys' Town and Harbour View, who have identical 5-2-2 records in the round, come next with 17 points each and are second and third, respectively, while Sporting Central and Humble Lions have 14 points each.

Said Maxwell: "It was a pretty good performance coming out of the festive season. We looked a bit dreary in the first half, but in the second half one or two changes made the difference.

"We have now completed 20 of 38 games and are sitting in a pretty good position to win the title. We just have to maintain our focus, work a bit more harder on some of the shortfalls in our game and take it from there."

Sporting Central's assistant coach, Nigel Stewart, conceded that Waterhouse were the better team on the day and his team had nothing to be ashamed of.

"The scoreline didn't really reflect the game. We scored first and were playing well. We were just beaten by two good goals. We have nothing to be ashamed of," said Stewart.

"We will be welcoming back head coach Donovan Duckie, who was away overseas, for our next match," he added. "We want to win, given the fact that another six points could still land us in the final."

Digicel Premier League summary after the 20th round of matches on Sunday.