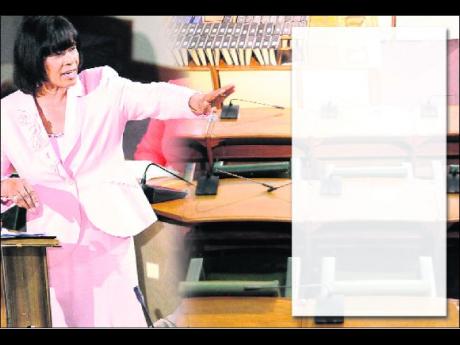 The full slate of the parliamentary Opposition, minus Kern Spencer, showed up at Gordon House yesterday as members sought to turn up the heat on the Bruce Golding administration to resume sittings of the House of Representatives and the Senate.

Opposition Leader Portia Simpson Miller, bolstered by energetic party stalwarts who flailed what they characterised as the range of Government's blunders, which have left the nation reeling, led the assault.

At a press briefing shortly after the protest sitting, Opposition Spokesman on Finance, Dr Omar Davies, was scathing in his characterisation of the Golding administration's management of the economy.

He argued that while four tax packages raised a flurry of questions, two unbacked advances by the Bank of Jamaica totalling $23 billion in November and December were major cause for concern, as this could trigger an economic collapse.

Davies warned that the unbacked advances, commonly referred to as the printing of money, would have severe implications for the foreign exchange market and asserted that the decision was fuelled by the failure of Government to raise $18 billion.

leader, supported the opposition leader's call for a resumption of parliamentary sittings by next week Tuesday.

But with the Government refusing to resume parliamentary sittings before January 19, smirking Opposition members described the Golding administration as "a Government in hiding".

"We call on the government side to be equally concerned and to take the people's business as seriously as we do," the opposition leader declared.

"The Parliament is not an audience to the prime minister's various press broadcasts," Simpson Miller.

Accordingly, Simpson Miller said the Opposition was placing on record to the prime minister and the Leader of Government Business Andrew Holness that the people's business would not wait until January 19.

But Simpson Miller was not done with Government.

She blasted the Golding administration for borrowing $477 million from the National Housing Trust (NHT) to finance drought-mitigation efforts.

At the same time, Simpson Miller said the Opposition was concerned with the Golding administration's approach to handling critical state agencies, including the NHT.

"The reports regarding either the dismissal, resignation or non-renewal of the tenure of the entire board of directors of the NHT is deeply worrying," Simpson Miller said.

"That institution has never been politicised, and if the reports we have been receiving are true, it appears to be the intention of some in the administration to convert the National Housing Trust into a political pawn."

Peter Bunting, the opposition spokesman on national security, pointed to the high murder rate, two shy of the all-time record set in 2005.

However, he said with other serious crime levels spiralling by 40 per cent, the situation was worse than it was four years ago.