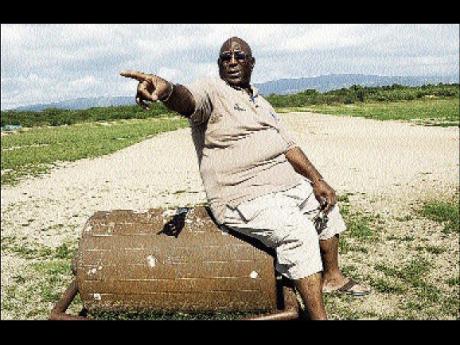 Lester 'Ken' Crooks, managing director, Ken's wildflower, Portmore Plaza, St Catherine, points to a large area on the outskirts of Westchester in Portmore where he has been working to establish a multi-sport facility. - Norman Grindley/Chief Photographer

THE LARGE plot of cleared land is in stark contrast to adjoining areas characterised by overgrown vegetation, mostly cassia and macca bush.

Six years ago, the area located on the outskirts of Westchester in Portmore was mostly cassia and swamp.

Today, the faint glimpses of a multi-sport facility have begun to emerge.

The plan is to erect a much needed mini-stadium in the populous community.

The brainchild behind the plan is Lester Crooks, better known as Ken, a big man with a big vision for Portmore.

"We got assistance from Dennis Montaque and Rondell Gibson and other members who pumped a lot of money into transforming the place," said Ken.

But, if you should venture into Portmore and ask for Lester Crooks, very few would know that the man is the very popular owner of Ken's Wild Flower.

Ken who has been doing business in the community for more than two decades, told The Gleaner that a master plan was already in place for the proposed cricket pitch, football field, netball court and gymnasium, among other facilities, that would form components of the mini-stadium.

In fact, Ken and others who share his vision have prepared the field so that it would accommodate the ever expanding Portmore cricket competition for two seasons.

Ken told The Gleaner a sight screen has even been erected. "President of the Portmore Cricket League built the sight screen as a contribution to the effort," he revealed.

He said the President of the Jamaica Cricket Association Paul Campbell had promised to build another, but the planners have encountered a glitch. He said the Government was contemplating using the lands as a residential site.

When The Gleaner team visited the area, a technical team from the Ministry of Housing was on hand carrying out soil inspection.

In fact, the Ministry has asked Ken and his team to vacate the premises by the end of the year, but the man who has contributed to the welfare of many in Portmore for more than 20 years continues to keep his vision alive.

He said Golding has responded favourably. "The Prime Minister seems to be interested in what we have to say, I am thankful for that," declared Ken. "It is for this reason that we are still there and are still hopeful." Ken revealed that four acres of land have been earmarked on another site but this is not enough to accommodate the vision. Since the land has been cleared, the area has served the community well.

Ken cited the Tony Walsh Cricket workshop for 130 youth, as well as another by the Portmore Cricket league which facilitated 167 young persons.