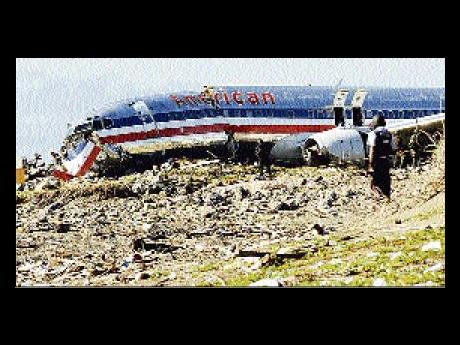 Police guard the wreckage of American Airlines Flight 331, near the seaside above the Port Royal road in Kingston, before it was moved to a hangar at the Norman Manley International Airport, last month. - Norman Grindley/Chief Photographer

Prominent US-based Jamaican attorney, Carlton Hume has noted that financial settlements between airlines and passengers on international flights that are disrupted can be quite substantial.

He disputes the notion that the threshold is US$135,000 for physical injuries or death of international passengers suffered on the airline, or while in the process of embarking or disembarking.

That amount, he said, is a strict liability "no questions asked" payment that is triggered in death or serious injury scenarios.

Speaking on TVJs Smile Jamaica programme on Monday (January 4), Hume, a personal injury specialist based in Hartford, Connecticut, cited the case of Swiss Airline Flight 111 which crashed over Canada in 1998.

He said the airline had reportedly paid out US $135,000 even before liability was assessed against them.

Hume pointed out that the higher provisions resulted from an agreement between the International Air Transport Association (IATA) on passenger liability established in 1997. This agreement, he said, was now recognized by most carriers, allowing passengers to recover full compensatory damages for physical injury or death in an accident, according to the laws of their domicile or place of permanent residence.

The agreement is a modification of the Warsaw Convention which governs international flight regulations.

He noted that although settlements for international flights, were generally more modest than those for domestic flights where payments of up to several million dollars have been made to victims by airlines, they were nonetheless significant.

Hume noted that as a "common carrier," commercial airlines are held to a heightened standard of care, adding that the passenger, upon purchase of a ticket, was entitled to, and in effect had, a contractual agreement to be carried safely to his or her destination.

He urged passengers on the American Airlines Flight 331, which crash-landed off the Port Royal Road on December 22, last year, not to sign any documents presented by the airline without consulting an attorney.

Further, he said the US$5,000 reportedly paid by American Airlines to the passengers for the inconvenience of being without their detained luggage was a case in point.

The attorney is also advising those passengers, who may not have the immediate financial resources to get specialist medical care, to seek other alternatives.

He suggested that they could approach their doctor or medical provider to accept protection letters from an attorney, in order to get the diagnosis and care until settlements were made.

"A Protection Letter from an attorney is a very essential tool used in the United States in affording treatment to injured persons who do not have medical insurance or the financial wherewithal to pay out of their pockets. We do not want people to be unable to receive treatment because they cannot afford the initial expenditure and medical care essential to prosecuting their claim," Hume said.

He added that the crash landing of the aircraft provided a great opportunity for the personal injury market in Jamaica to evolve and get closer to international standards, by allowing both doctors and lawyers to get more acquainted with the practice.