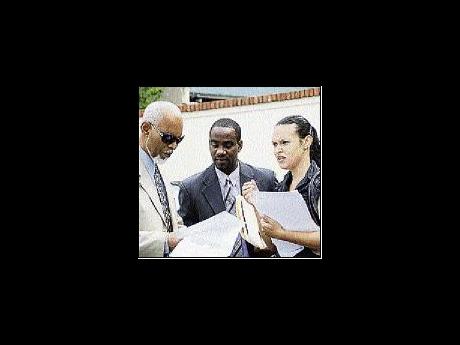 Director of Public Prosecutions (DPP) Paula Llewellyn was yesterday warned by Resident Magistrate Judith Pusey that aspects of the Cuban light bulb corruption and money-laundering case being advanced against North East St Elizabeth Member of Parliament Kern Spencer and his companion, Coleen Wright, could crash because of the handling of the matter.

Yesterday's sitting was halted twice after defence counsel complained that they had not been given full disclosure on the matter of how prosecution star witness Rodney Chin transferred recordings from one phone to another.

Chin told the court that he had made recordings, maybe five or six, on a malfunctioning phone, before transferring them to a burgundy Samsung instrument that he used to record other conversations.

He said that he transferred the recordings with the use of Bluetooth technology.

However, defence counsel said that Chin's statement made no mention of any transfer of recordings from one phone to another.

K.D. Knight, in particular, complained that many of the issues relating to the cellular phone recordings were being heard for the first time.

Pusey upheld the objection, leaving Llewellyn no choice but to agree to serve another statement from Chin on the defence.

Llewellyn sought and received permission from the judge to call investigating officer Fitz Bailey for clarity.

The RM granted an adjournment earlier in the day for the matter to be sorted out. However, within one hour after the resumption there was a request for an adjournment by the prosecution, as the transfer of the recording from one phone to another by Chin became a major issue.

Earlier, Chin said that he purchased three SIM cards, one for himself, one for Spencer and one for Sherine Shakes, who was the projects manager. Chin told the court that whenever they called him he used a built-in recorder in his phone to make the recordings.

The Crown is alleging that Spencer and Wright colluded with Chin to set up companies in order to benefit from millions of dollars in contracts under the Cuban light bulb programme.

He told the court that in October, 2007, at the request of Spencer, he signed the letters that were dated May and June of 2006.