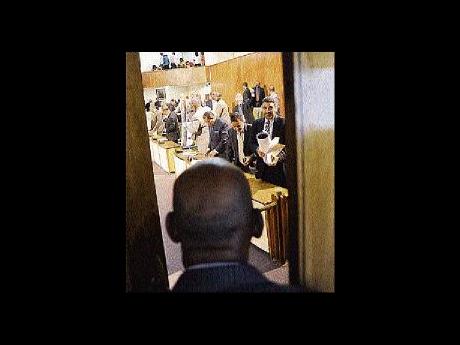 Minister of Health Rudyard Spencer looks in on members of the Opposition at Gordon House yesterday. - Ricardo Makyn/Staff Photographer

The mace was missing while the Speaker was absent and the clerk of the house stayed away - she watched from a distance - but that did not prevent the People's National Party from treating the occasion with a level of seriousness usually reserved for the annual ceremonial opening of Parliament.

From just before 2:00 yesterday afternoon, members of the Opposition started gathering at Gordon House for an unofficial sitting of Parliament.

The empty government benches were ignored as Member of Parliament for Central Kingston Ronald Thwaites opened with prayer, though it was not the traditional supplication given at the start of each sitting of the House.

This was quickly followed by Leader of Opposition Business Derrick Kellier, who outlined the party's reason for taking its ongoing protest to the House of Parliament.

Then it was time for Opposition Leader Portia Simpson Miller, who used just over 20 minutes to deliver her presentation.

From the later entrance of Dr Patrick Harris to the usual desk thumping and snide remarks, the Opposition played to a gallery made up mainly of members of the media, the security forces and parliamentary staff.

Simpson Miller was in full stride in her 'Mama P' role, defending the rights of those she said were being abused by the Government, and was rewarded with a standing ovation as she closed her presentation.

A lighter moment was injected just before the end as government MP, Health Minister Rudyard Spencer, poked his head through the doors of the chamber.

"Join us, come join us man," shouted some members of the Opposition as the chamber erupted.

Ever good-natured, Spencer stayed around for several minutes, but no more than his head went through the door.

Spencer had been at Gordon House from early yesterday morning for a committee sitting.