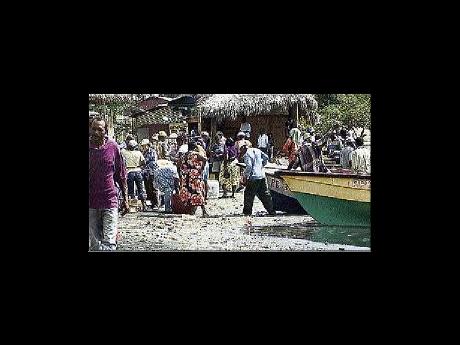 Residents of Alligator Pond in St Elizabeth conduct business at the fishing village in the community on Monday. Calm returned to the area yesterday following the shooting of two men by the police on the weekend and subsequent protests by residents, who declared the men's innocence. - contributed

CALM HAS returned to Alligator Pond in St Elizabeth following a weekend marred by the shooting of two residents by the police, which triggered strong protests by members of the community.

Residents of the quiet fishing village vented their anger by staging street protests against the shooting they described as unjustified.

People from Alligator Pond had burned makeshift barricades and stoned the police station, damaging a number of vehicles.

On Monday, the town square still bore marks of what took place on the weekend, as piles of charred debris dotted the roadside, accompanied by the smell of burnt tyres, which lingered in the air. At the police station, which is located in the centre of the town square, workmen were busy cleaning up broken glass from the station house and its yard.

A small group of residents gathered near the police station with placards as they insisted on the innocence of the men.

Leader of the group, Mishah McDonald, said he and other residents were very disappointed with the action of the police, adding that this was not the type of policing that they had become accustomed to over the years.

Stressing that the community had always enjoyed an "excellent relationship" with the Alligator Pond police, McDonald said it was a shame that it took police personnel from outside to "cause tension between the police and the community".

Sergeant Donavon Boothe, who is in charge of the Alligator Pond police, told The Gleaner the incident was regrettable and assured that the Jamaica Constabulary Force would investigate the incident impartially.